Triple Triad is a recently popularized card game in Eorzea, wherein players make clever use of their deck's composition to defeat their opponents. 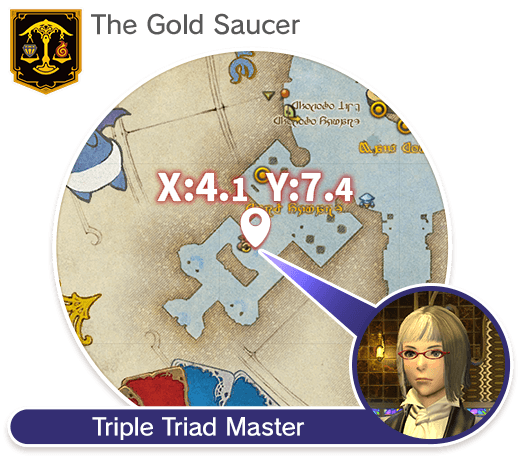 * The tutorial match against the Triple Triad Master can be repeated as many times as desired.

To take part in Triple Triad, players must first proceed to the Card Square. 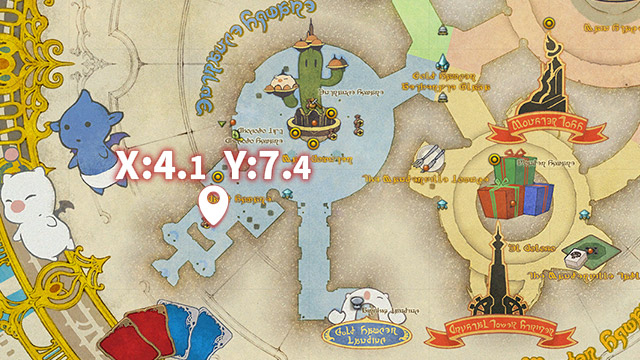 The first step to becoming a successful Triple Triad competitor is building a deck.

After completing the quest "Triple Triad Trial," players will receive five cards. Using the cards in your inventory will register them to your Card List, which can be accessed by selecting Gold Saucer under Character in the main menu. To create a deck, access Card Decks, also located within the Gold Saucer options, and select one of the five available slots to assign cards to a deck.

Once you have prepared a deck, speak with the Triple Triad Master to engage her in a tutorial match.

New cards can be obtained from the Triple Triad Trader NPC found in the Manderville Gold Saucer, as rewards from winning against various NPCs, and as prizes from Triple Triad tournaments. 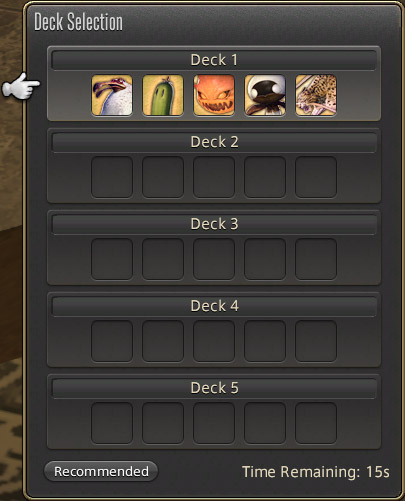 Unwanted cards in your inventory, such as doubles of those already registered to your card list, can be sold for MGP to the Triple Triad NPC in the Manderville Gold Saucer (X:4.1 Y:7.4). 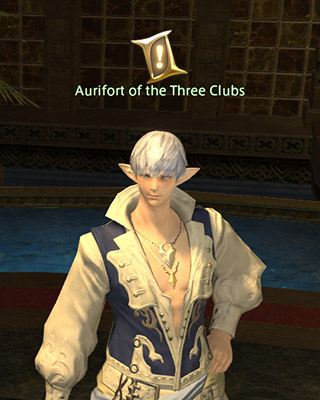 Certain NPCs are willing to play a game of Triple Triad with you. Such NPCs can be identified by a unique icon over their heads. For a small amount of MGP, players can challenge them to matches, and potentially win additional MGP and acquire new cards. 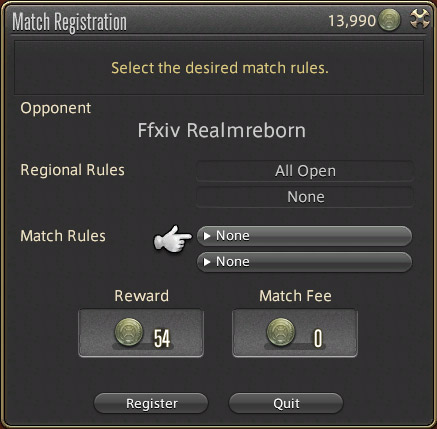 Other players can also be challenged to Triple Triad matches. To issue a challenge, target your desired opponent and select Challenge to Normal Match from the subcommand menu. Although no fee is incurred, neither are there card rewards to be had. However, players will receive an MGP bonus for up to five wins every day. Eligibility to receive this bonus is reset every day at 7:00 a.m. (PST). The rules for the match are set by the player issuing the challenge. Moreover, a challenge can only be issued in areas designated for Triple Triad matches. 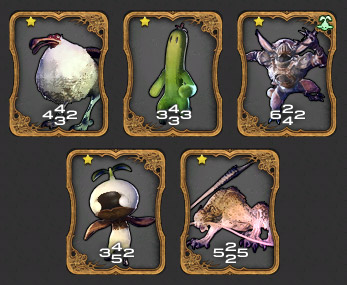 As of patch 2.51, 80 varieties of Triple Triad cards are available. While some cards can be purchased with MGP at the Manderville Gold Saucer, others can be obtained as rewards from defeating NPCs, Triple Triad Tournaments, and the completion of certain duties. As cards cannot be traded or purchased from the market, players are encouraged to challenge NPCs and journey throughout Eorzea in search of rare and powerful cards.

All cards can be classified by rarity (one to five stars). The higher its rarity, the more powerful the card.
As such, each deck may only contain a limited number of cards with a rarity rating of four or more stars.

* Only one four star card may be placed in a deck when it also contains a five star card.

In the upper right corner of certain cards is an icon indicating a type, which comes into play when used with certain rule sets.

2. The player who goes first is decided at random.

3. When it is your turn, you must place a card on one of the open spaces on the grid.

4. When a card is placed, the numbers representing its four sides are compared to any adjacent cards. If a number on the card placed is greater than the number it faces on an adjacent card, you will flip that card and capture it.

5. The objective is to capture and control more cards than your opponent. After nine cards have been played, the player who controls more cards is the winner. Note that the unplayed 10th card is also counted. 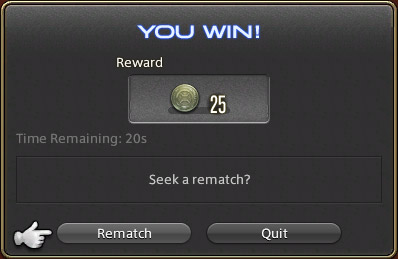 In Triple Triad matches, each player has an overall time limit of ninety seconds in which to decide their moves.

You will, however, have a five-second "thinking" window at the beginning of every turn, during which the turn timer will not deplete. But don't ponder for too long! Once this grace period ends, the timer will start ticking down again from wherever it left off.

Thinking windows are represented as a red section on the timer gauge. 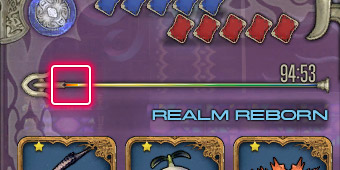 Should the turn timer run down completely, your next card will be placed automatically. An empty gauge also means that you must make each subsequent turn within the five-second thinking window, or watch as your cards are played for you.

Needless to say, a wise player soon learns the importance of time management!

In addition to the basic rules, there are a number of advanced rules that can alter the way a Triple Triad match is played. They can be applied under a variety of circumstances, and can be considered either "regional rules" or "match rules."

Regional rules vary by location, and are reset daily at 7:00 a.m. (PST). Up to two regional rules are in effect at any given time, and certain preferences may be observed in each region. It is worth noting, however, that certain NPCs will not adhere to regional rules.

The Battlehall is an instanced area where players within the same data center can gather to challenge one another in Triple Triad. It may be accessed from any location via the Duty Finder. 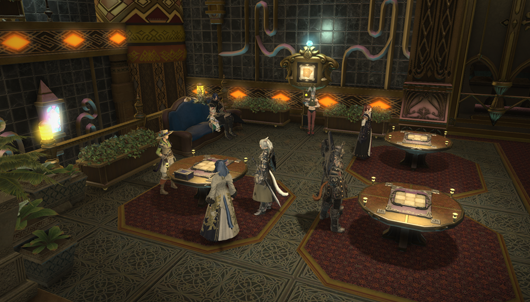 In addition to challenging other players and NPCs directly in the Battlehall, players can also choose to be matched at random by speaking with the Hall Assistant NPCs located in each corner of the room.
* You cannot challenge other players or accept offers to play Triple Triad while queued via Battlehall Matching.

Match rules are decided upon by the participants. A maximum of two match rules can be in effect at any one time, using a combination of the rules selected by both opponents.

However, should two players choose any of the following combinations of rules, one of the two will be selected at random:
All Open and Three Open/Order and Chaos/Ascension and Descension

The Manderville Gold Saucer will periodically host Triple Triad Tournaments, some of their most enthralling and popular events. Compete against the realm's best players for a chance to win some of the rarest cards to be found in Triple Triad. 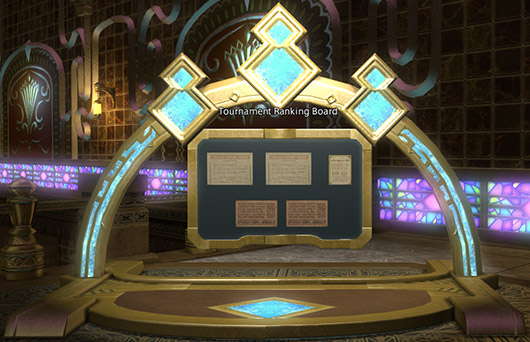 Players can sign up to participate in ongoing tournaments by speaking with the following NPCs:

* Players must first complete a tutorial match with the Triple Triad Master before participating in any tournaments.
* Tournament matches can only be held in the Battlehall.

Tournament participants can only play a set number of matches per tournament, with every match played counting toward their final scores. Each tournament has a fixed set of advanced rules that tournament matches must follow. This does not apply to regional rules.

Players must first register with the Hall Assistant NPC to take part in tournament matches. Once registered, they will be randomly matched with another player. Players will continue to be randomly matched every time a match finishes, unless they cancel their registration in the window that is displayed at the end of matches. It should also be noted that, in addition to players, NPCs located within the Battlehall can also participate in tournaments.
* Players will appear in the Gold Saucer Card Square after finishing tournament matches, regardless of where they started the match.
* Players will be removed from the Battlehall 15 minutes before the end of tournaments. In the event players are in the middle of a match at this time, they will leave the Battlehall once their match has finished.
* Players will not be paired with players they have already battled while they are in the same Battlehall.

Players can view the standings for ongoing tournaments at any time by either speaking with the Tournament Recordkeeper NPC at the Card Square in the Manderville Gold Saucer (X:4.2 Y:7.0), or examining the nearby Tournament Ranking Board. Scores will be locked the moment the tournament ends, and these numbers will determine the final rankings.
When two or more players share the same score at the end of a tournament, rank is then determined by the greatest number of wins. If wins are also equal, then rank will be decided by the least number of matches played. Should match numbers also be equal, then the higher rank will go to the participant who first recorded a result on the tournament ranking board.

Short-mode tournaments are contests designed for groups of eight participants.
There are two styles available: Open tournaments, which match players at random, and Invitational tournaments, in which players form a party and play against each other. In both styles, participants are ranked on their performance over a total of three matches.

Open tournaments also offer rewards based on match results, so brush up your Triple Triad battle skills and sign up today! 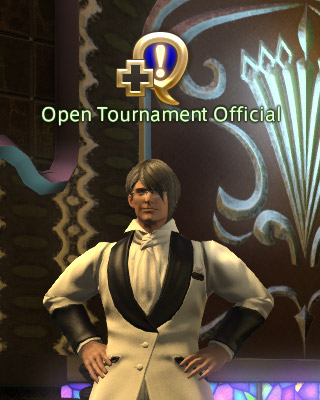 After completing the quest "Triple Triad Trial," simply speak with the Open tournament official in the Gold Saucer (X:4.5 Y:7.4). Once his explanation is complete, you will immediately become eligible to register for both Open and Invitational tournaments.

These contests are held on a regular schedule in the Gold Saucer.
The Draft rule always applies, and players must first build a temporary deck which they will use over the course of the three matches.
All cards are provided by the "house" and no registration fees apply.

To sign up, first make sure you are not in a party, and then speak with the Open tournament official during the registration period.

If a set time passes without enough players registered to fill the group, the remaining slots will be filled with NPCs.

MGP and card prizes are awarded based on final tournament rankings.

The tournament schedule can be viewed by speaking with the Open tournament official.

These contests can be held at any time with the party members of your choice. The party leader is responsible for setting any tournament rules.

Form a party, and reserve a room in the Triple Triad Invitational Parlor via the Duty Finder.
Should your party have less than eight members, the remaining slots will be filled with NPCs.

Invitational tournaments offer no rewards beyond the thrill of competition.