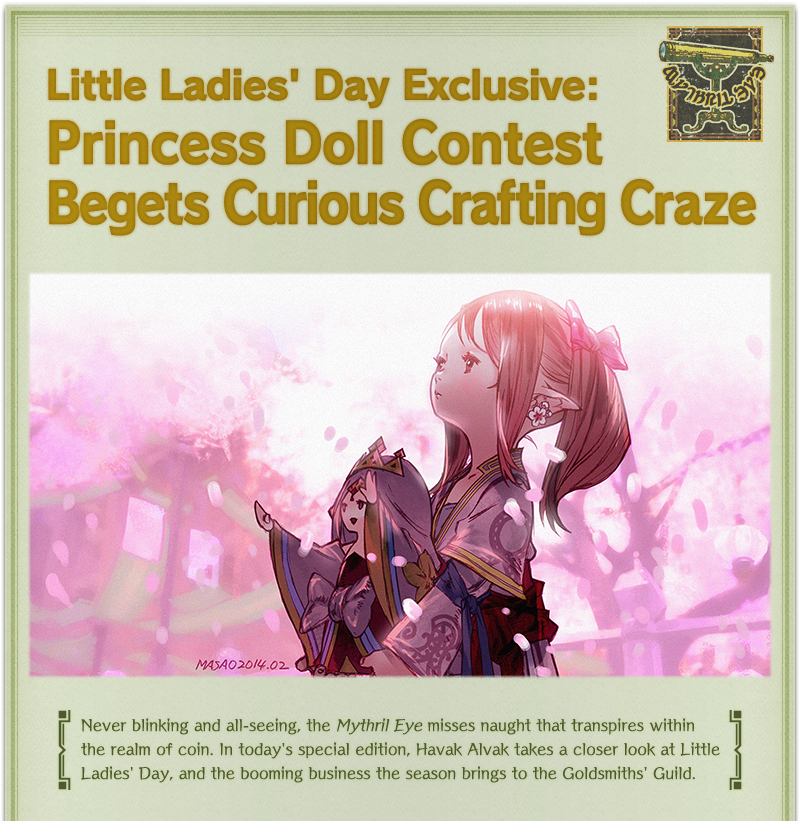 Dolled Up for the Holidays

Spring has returned to Eorzea, and the motherly Matron has seen fit to bless the realm with a botanical bounty of precious peach trees. The city-states, now clad in lovely shades of pink, play host to a bevy of bewitching beauties of every sort, beside themselves with excitement and expectancy. Their convivial comportment can mean but one thing─the return of Little Ladies' Day, where young maidens across the realm are treated as princesses for a day.

While this mirthful merriment is a matter of course, the Mythril Eye ever seeks the story beneath the surface, and its sights are now set on the services of the Goldsmiths' Guild. Customers line the walls of Eshtaime's Lapidaries reaching as far as the Ruby Road Exchange, but there are no signs of accentuating accessories for sale. What commodity has caught the townsfolk's collective eye?

The answer, dear reader, can be found in this year's Little Ladies' Day contest. Capable craftsmen the realm over have been called upon to craft dainty dolls in remembrance of Princess Edvya, the little lady of legend in whose honor the festival was founded. The dolls will thence be dressed in glorious garb, and a winner will be chosen by the mirthful maidens of each city-state who will cast their vote for their favorite of these fetching figurines.

Rich rewards await the most creative craftsman of the contest, and talk of fame and fortune is now hot on everyone's lips. Such is the secret behind the guild's recent boom in business, as doll-dressers across the realm seek only the most magnificent models with which to realize their aesthetic aspirations. To that end, the goldsmiths of Eshtaime's Lapidaries now work with a frenetic fervor, so as to meet recent interest in tantalizing tapestries and beguiling beadware. Crafting materials virtually vanish from the stands of merchants the moment they're put on display.

The stalls of Ruby Road are now stripped of their stock, but I imagine this poses no threat to an adventurer─a spirited soul that would brave the wilds in search of supplies and spoils both. Myriad are the ways to partake in this year's revelry, and with a little luck, perhaps your entry will be deemed the most delightful doll of them all.

The Legend of the Lost Lady

Three centuries past, the city-state of Ul'dah was ruled by an iron-fisted sultan by the name of Baldric Thorne—a man feared across the region for his quick temper and his even swifter justice. Perhaps as punishment for his compassionless ways, the Twelve saw fit to bless the sultan with but a single daughter, Edvya, whom the sultan loved more than the sun and the moons. And it was this love that drove Baldric to take measures that would ensure no harm ever befell the princess—including her confinement to the royal palace and the assignment of a retinue of over fifty handmaidens and seneschals.

As the princess grew older, however, a longing to explore the unknown land that lay beyond the palace walls tugged at her soul, until one day, in a devilish display of wit, she switched clothes with a miller girl come to the palace with her mother to deliver flour to the kitchens. Once Edvya had exchanged her beautiful gown and tiara for the soiled rags of a commoner, it proved little trouble to pass unnoticed through her legion of servants and slip out into the city for a day of wicked fun.

It did not take long for the palace to realize something was afoot, and upon discovering that his only daughter was missing, the sultan, overcome with rage, immediately ordered the sultanate's entire standing army to scour the city until they had found the princess. As for the royal impostor, thinking that Edvya may have been kidnapped by the girl's mother, the sultan ordered the miller's house torn apart, her family arrested, tortured, and thrown in the royal oubliette.

As luck would have it, the princess had not wandered far from the palace, and was discovered in a nearby market by her father's men. Once back in the safety of the palace, Edvya revealed the whole ruse to her father, explaining that she had conjured it on her own, and begged that he show mercy to the miller's family.

Upon realizing that the atrocities committed to the miller girl and her family were without warrant, he had the family released from the oubliette and summoned to the royal audience chamber. Here, not only did he personally apologize to the family and order the royal architects to design and build them a new home, but, in a move most unexpected, Baldric himself offered to serve as the daughter's seneschal for a full day, saying that no young woman, regardless of her standing, should be denied the respect due all citizens of the sultanate; that all girls, common or noble, are 'ladies' in their own right.

Rumors of this unforeseen display of humility were quick to spread through Ul'dah and ultimately proved to be extremely well-received amongst the smallfolk, who, until then, had perceived their leader as little more than a heartless despot. So well-received were they, in fact, that the sultan declared one day from each solar year on which he would select, via lots, a common girl from the city and serve as her personal seneschal, as he had done with the miller's daughter.