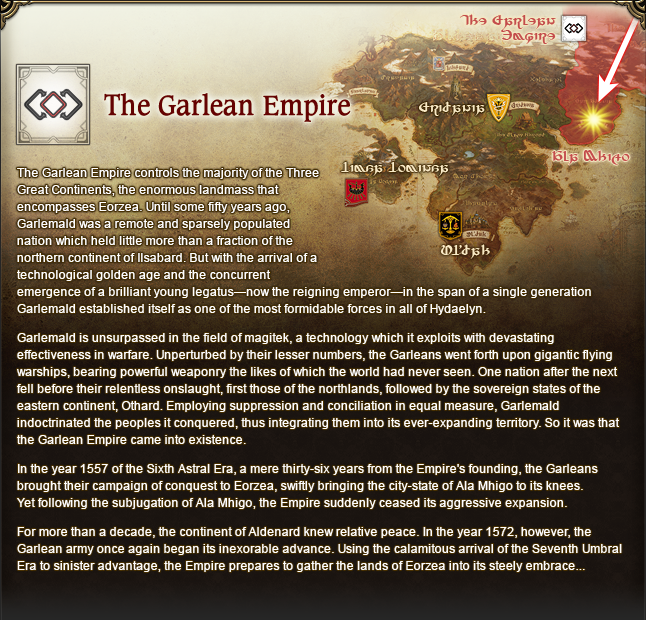 Legatus of the XIVth Legion, the imperial force currently occupying Ala Mhigo, van Baelsar is possessed of a natural flair for wartime command equaled perhaps only by his sensibilities as a governing administrator. Among his numerous accomplishments is the conquest of five enemy cities, the political conversion of which he also oversaw. In subjugating Ala Mhigo, van Baelsar employed subterfuge to stoke the fires of civil unrest, a masterstroke which led to the nation's capture without the need for a protracted siege. However, the unanticipated appearance of a primal shortly thereafter prompted the Empire to halt the legion's advance. The legatus has since remained in Ala Mhigo, where he rules as an imperial viceroy.

Motto: He who cannot preserve the sovereignty of his nation is unfit to rule it.
Weapon: Heirsbane—a gunblade said to have spilled the blood of nine aspirants to the crown.

Legatus of the VIIth Legion presently dispatched to the western front, van Darnus boasts distinguished parentage in his sire, a founding figure of the Garlean Empire. A ruthless man who has risen to infamy even among his own people, he draws no distinction betwixt friend and foe when met with dissent. Tales are oft told in hushed whispers of van Darnus's swift rise to power upon the abrupt death by illness of his sire, whose body had no sooner grown cold than his closest aides were put to death.

The White Raven seems a man well-suited to such dark rumors, for it is his pet project, "Meteor," that will herald Eorzea's inevitable plunge into the Seventh Umbral Era...

Motto: Opposition must needs be put down with fire and steel.
Weapon: Bradamante—a gunhalberd said to be named for a warrior maiden he slew. 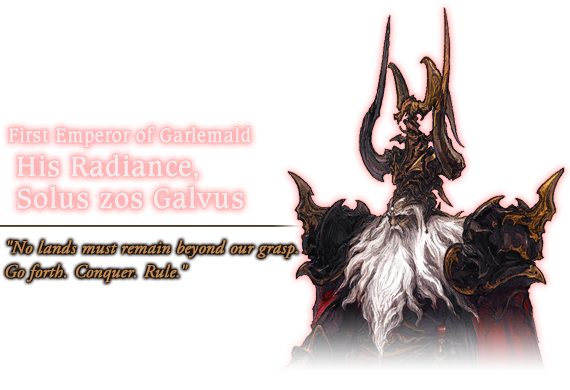 Born of distinguished lineage in the Garlemald Republic, Solus zos Galvus began his military career at a young age. After a string of impressive victories on the field of battle, however, he soon attained the rank of Legatus, and proceeded to integrate machina technology into the army's regular rank and file. With single-minded determination, Galvus transformed his fledgling nation into a formidable military power.
His actions garnered the undivided support of the citizenry, and catapulted him into the position of Dictator, supreme commander of Garlemald. In the years that followed, Garlean forces conquered all the lands of the north and hammered them into a single entity. Galvus then instituted an imperial regime to govern their new territories, conferring upon himself the title of "Emperor."
The eastern nations were the first to feel the newborn empire's mighty fist. It was during this campaign that the emperor witnessed firsthand the destruction wrought by the primals—an experience that led to an imperial mandate for their annihilation.
Now an old man of more than eighty winters, Galvus yet rules as emperor, but court rumors speak of frail health and frequent illness.