Doma, province of the Empire.

Ensconced in the private room of a tavern, a courtesan poured a cup of wine for a gentleman with practiced grace.

Tedious wretch, Yotsuyu cursed inwardly, betraying no hint of irritation. She had thought this simple man of war would be less resistant to her charms.

Over the course of an evening, she would use drink and desire to erode her mark's defenses, drawing out secrets one by one, before serving the most delicious morsels to her employer. As an imperial spy, it was an act she had performed a hundred times, and this night was meant to be no different.

But her guest was not cooperating. Zenos yae Galvus, legatus of the XIIth Imperial Legion, was clearly disinclined to trust his hosts from the Doman garrison. Despite the warmth of the sitting room, he made no move to shed his armor, receiving his cup with a gauntleted hand. His eyes were dull and focused on nothing, and yet in their depths she discerned a muted glimmer of anticipation. What are you waiting for...?

Originally, Yotsuyu's masters had assigned her a different mission─Lord Kaien, Doma's former ruler, was reported to have assembled an army, and it seemed an uprising was imminent.

Thus had she been tasked with infiltrating the ranks of the rebellion. She was to offer them military intelligence supposedly gleaned from imperial visitors to her establishment, and play the part of a devoted patriot, willing to risk her life to gather vital information. Once in place, she would instead funnel the rebel army's plans back to the Empire. A betrayal of her kith and kin, to be sure, though the courtesan felt not the slightest shred of remorse.

Was it not her closest kin─her foster parents and her late husband─who had made her life a living hell? And none who witnessed this treatment had lifted a finger in her defense. As far as Yotsuyu was concerned, her countrymen were complicit in her abuse, and deserving of the same punishment as her abusers.

Yet on the day she was to begin the operation, the garrison's intelligence officer called her back. They had received word that an imperial legatus would shortly be arriving from the capital to assess the situation in Doma. Lord Zenos was his name─one she had heard before.

With Emperor Solus on his deathbed, a clandestine war of succession was already being waged in Garlemald. Solus's eldest being dead, his grandson Varis was next in line to the throne, but the Emperor’s second son Titus had other ideas, and no shortage of support. What he did not have, however, was Varis’s standing with the military, nor less a ready heir─this Zenos.

As a public ally of Titus, the viceroy plainly considered the legatus a threat, Yotsuyu saw. And the fact that they would entrust her with so important a target bespoke how high she had risen in their esteem. Finally, some recognition. She favored the intelligence offer with a wintry smile.

"I understand Kaien and his fledgling rebellion have yet to be stamped out. Could it be that the viceroy's superiors are unsatisfied with this lack of progress?" Yotsuyu feigned a look of sympathy. "How galling it must be to have a political rival travel all this way just to prod one’s sorest spots."

The officer frowned in consternation.

"We are well aware that Doma's present troubles afford our opponents an opportunity to undermine our position. But this visit also affords us an opportunity," he continued, fixing Yotsuyu with a meaningful stare. "If we were to tease from Zenos some insight into his father's plans, we may yet emerge from this exchange with the upper hand."

"It's all the same to me," Yotsuyu purred. "Another man, another evening. He passes the night in bliss, and I steal every word that falls from his careless tongue. Simple."

They had treated her like cattle, but now she held the switch. She had no taste for the sweet nothings men showered upon her─it was the spectacle of their graceless slide into self-destruction which sated her vengeful appetite. At least for a time. 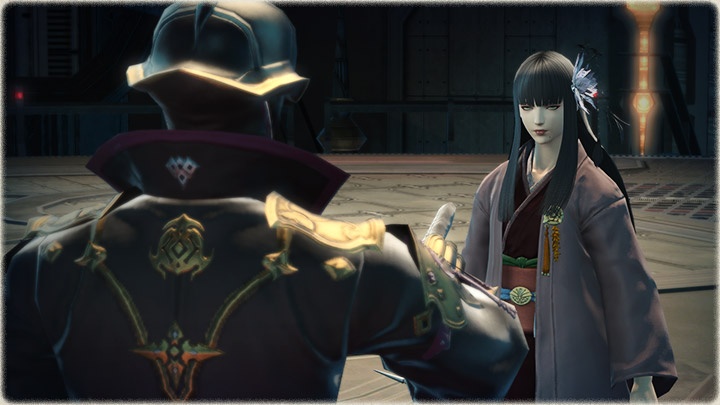 Yet the plans of both Yotsuyu and the viceroy were defeated at the outset by Zenos's unshakable lassitude. The visiting legatus barely spared his host a glance as he lounged with obvious boredom on the cushions provided. Having braced himself for a humiliating examination of his failures, the viceroy withdrew in some confusion, leaving Yotsuyu to attend to the needs of his "guest."

The hour grew late, and Zenos emptied his cup again and again. But the wine may as well have been water for all the effect it seemed to have upon him.

Will the man never get drunk? Yotsuyu wondered in exasperation. Then, just as she had begun to contemplate simply throwing herself naked into his lap, he spoke.

"What manner of place is this...Doma?"

The courtesan hesitated at the sudden question. She had no shortage of answers, of course, and could gladly wax lyrical upon the shortcomings of her despised birthplace until dawn. But her task was to unburden her target of his secrets, not unburden herself. At least he’s talking. I’ll loosen that tongue yet... As she looked up, however, the perfunctory response she had prepared died in her throat. The eyes which had spent the evening staring past her now bored into the depths of her soul.

"I am weary of empty chatter," he warned. "Tell me instead how such a face came to hide such bitterness. The tale may serve to amuse me."

"Such a blunt manner you have, my lord," Yotsuyu quipped, unwilling to relinquish her façade. "Shall we blame the sake for this breach of etiquette?"

Zenos merely stared in silence. It was plain he had no intention of acknowledging her deflection. Rather than feel discomfited, however, Yotsuyu found herself spellbound, the glare of his undivided attention captivating in its brilliance. In an instant of clarity, she understood. This man will go far.

The sound of falling rain seeped into her consciousness, a sudden hammering downpour that dissolved the moment which had held her frozen. But a connection had been made.

"The briefest stay in Doma will tell you all you need to know, my lord," Yotsuyu began, "Yanxia is a dunghill."

Zenos drained the rest of his cup, and leaned forward with interest.

"Ah, there you are. It intrigues me to see a woman struggle with such rage, when tradition dictates that she appear meek."

"Tradition?" the courtesan spat. "My countrymen strangle themselves with the shackles of worn-out customs and formalities. Their eyes bulge and their limbs spasm, and still they cling to precious notions of honor and sacrifice."

Now that she had given voice to her hatred, the words came spilling forth unbidden. A deluge which would have continued unabated had Zenos not risen to his feet.

His eyes seemed to seek something beyond the walls of the tavern.

"Waiting on the storm to cover their approach..." he murmured. "I was curious to hear more of your story, but the evening's true entertainment has arrived."

"What─" Yotsuyu had barely uttered the question when the nearby window exploded inwards. Ears ringing from the noise, she registered several black-clad forms clambering in through the breach.

The intruders drew blades, and surrounded Zenos with appalling swiftness. Yotsuyu, meanwhile, scrambled backwards in a crouch, and took in the unfolding scene. Assassins, she realized coldly, and not terribly discrete ones. They had dressed themselves in the garb of shinobi, but their swords, and the manner in which they held them, were distinctly imperial.

"Bastards!" she screamed, furious at her own gullibility. They sent me here to die!

Not one of the masked killers so much as glanced in her direction. Zenos himself seemed unconcerned, bored even, as he surveyed the naked steel arrayed against him. Making no move to retrieve his own sword, propped out of reach against the wall, the legatus calmly addressed the room.

"'Lord Zenos, slain in the arms of a Doman courtesan.' Yes, such a scandal is worth the ignominy of failing to protect a royal guest." His lips curled into a humorless smile. "And should Doma's fugitive ruler be implicated in the plot, all the better. The viceroy would have his reinforcements within a week."

The assassins remained mute as they edged closer and closer. In the next instant they were upon him, blades flashing in synchrony, their tightening circle obscuring his armored form from Yotsuyu's view.

Bracing for the inevitable, she was momentarily confused when each of the attackers seemed to pause in unison, before slumping lifeless to the floor. As they fell, Zenos appeared to her to rise from the tangle of black-clad limbs like a vengeful angel... But in truth he stood motionless, his expression unchanged. In one hand he held an assassin's sword. How...? Yotsuyu gaped in disbelief, trying to make sense of what she had just witnessed. She could but assume that he had seized a blade at the last moment, and felled the entire band with one impossible cut.

"I had hoped that a land on the brink of rebellion might offer some measure of sport." The legatus looked down at his fallen opponents, and grunted in annoyance. "But if the viceroy imagines a handful of hired knives sufficient to remove me from the hunt, I have sorely overestimated my prey..."

Yotsuyu felt something warm trickle down her cheek. Unthinking, she raised a hand to wipe it away and was bemused to find her fingers stained red. Glancing down at her kimono, she saw that it was spattered with blood.

Looking up, she noticed the legatus gazing upon her once more, and realized that she was indeed smiling. Of the many imperial officers she had encountered, some reputed "great men," not one seemed so assured of his own power, nor so uninterested in projecting it.

Should this strength be brought to bear upon Doma, her wretched nation would finally meet the end it deserved. Zenos's eyes narrowed at her widening grin, and he strode uncaring over the bodies of the slain to bring his lips close to her blood-streaked face.

"What is your name?" he breathed, voice scarcely above a whisper. 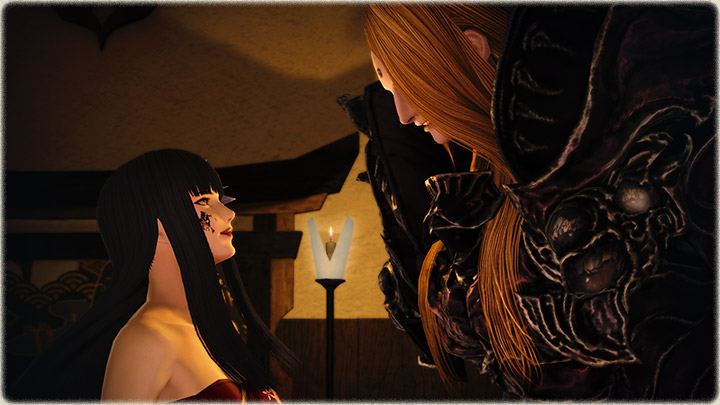 When morning came, no mention of the failed assassination attempt was made, and Yotsuyu duly returned to her mission to infiltrate the rebel forces.

Days turned into weeks, and when the heady rush of that blood-soaked evening had at last begun to fade, Kaien staged his long-planned rebellion. Predictably, the Doman viceroy could not contain the revolt, and the XIIth Legion was dispatched to intervene. After sweeping through Yanxia, Zenos defeated Kaien himself in single combat, and the rebellion crumbled soon after.

Among the crowd of haggard onlookers "encouraged" to watch the XIIth Legion’s subsequent victory parade through the enclave, a courtesan stood unregarded. She had eyes only for the man who marched at the head of the procession, his features blank and unchanging under the bitter scrutiny of the Doman citizenry. And when she slipped away to follow behind the soldiers, there were none who noted her absence.

Some few days later, the acting viceroy who would rule over the lands of Doma in Zenos's stead was announced: a woman by the name of Yotsuyu.

The power was hers now, to taunt, torment, and torture every miserable soul who huddled in her hated domain. Draped in an elegant kimono and twirling a slender pipe, she looked down from the walls of Doma Castle...and smiled.