The mood in the Flames carriage was worthy of a wake. While pretending to gaze out at the parched landscape of southern Thanalan, the youth tried in vain to think of something to say. Across from him sat the grand company’s recently formed summoner squad, the doughty souls charged with combating primal threats—none of whom had said a word since their departure. Silently, he rehearsed an opening line. So─you lot brave or stupid or both?

Although he and his had been dispatched to render aid in this mission, they had yet to establish a rapport with the soldiers, and he was determined to break the ice.

"My name’s Arenvald. Arenvald Lentinus," he eventually managed. And when no response was forthcoming, he added, "So—you lot...fight primals often?"

At this, the Lalafellin summoner sitting opposite shrugged wordlessly. Why do I bother... But then the woman next to him took pity and replied.

"As often as circumstances warrant, I suppose. Crispin and I have battled Ifrit four times now," she said, gesturing at the third summoner, who gamely accepted the conversational baton.

"Though our experience pales in comparison to the lieutenant’s. Jajasamu is formerly of the Company of Heroes—he faced the Lord of Crags and lived."

Ah, so he’s the dab hand. The lieutenant glanced at him briefly before looking away again, indifferent. Probably wondering why you’re riding with a pair of young nobodies.

"Veterans, then? That’s a relief. I’ll try not to get underfoot."

As soon as the words had left his mouth, he regretted playing the part.

"Useless bloody whelps. If ye value yer life, ye’ll do two things: watch and learn," Jajasamu snapped, before resuming his pre-battle ritual of ignoring one and all.

So that’s the way it’s going to be, eh? Arenvald stifled a sigh and forced a smile as he glanced sidelong at his fellow whelp, praying to the Twelve that she wouldn’t make matters worse. But if the lieutenant’s words had struck a nerve, she didn’t show it. Her eyes were closed, her face devoid of all tension, the very picture of serenity. The calm before the storm.

Maybe the two of them have the right of it.

Accepting defeat, Arenvald abandoned his brilliant plan to befriend the squad before the battle, and instead cast his mind back to the circumstances that had led him to share a carriage with the summoners and Fordola Lupis.

Fate and the Scions had conspired to bring him back to Ala Mhigo, his homeland, and it was there that they had first met—as mortal enemies on the battlefield. The same age, the same birthplace, and yet somehow they had come to lead such different lives. He, the half-breed spawn of a Garlean soldier, cast out by his mother, had left Gyr Abania and become an adventurer, while she, a pureblood daughter of Ala Mhigo, had been gifted an imperial education and taken up arms against her own countrymen.

Yet for everything we strove to escape, to deny, our paths led us here.

As a Scion, he had earned the respect of the Resistance and the Ala Mhigan people, whereas she, as a traitor and a kinslayer, had earned their scorn. Only death would answer death, they believed—nor, perhaps, were they wrong.

And then came the day they stood on the same side of a battlefield.

Representatives had gathered from all across Gyr Abania to discuss the future of Ala Mhigo, only for proceedings to be plunged into chaos by Ananta treachery. Sri Lakshmi, summoned by the Qalyana, would have bound all present to her will, were it not for the intervention of the Warrior of Light, Arenvald...and Fordola.

With those words, Fordola had thrown down the sword Lyse Hext put in her hands when the former Scion had challenged the hated Butcher to take her own life—as Zenos had—or use her newfound powers for a noble purpose. Arenvald watched them lead her away, watched as they once more debated the fate of his kinswoman and her fellow collaborators. In the end, it was Raubahn who had proffered the solution: conscription. A new unit in which some convicts might serve out their sentence instead of in a cell or at the end of a rope.

Though others were extended the offer, it was plain who they wanted most. Fordola had proven herself capable of withstanding primal influence. Her abilities as a Resonant, coupled with her combat expertise, made her an invaluable asset in the never-ending war against the primals.

The words of the Roegadyn captain riding with the coachman dragged Arenvald back to present. With practiced precision, the summoners grabbed their gear and disembarked, forming a line before their superior. Arenvald followed suit.

"As you know, yesterday, Master Coultenet of the Scions informed us of an aetheric disturbance in the vicinity of the Zanr'ak altar. Said disturbance can almost certainly be attributed to a primal summoning." The captain walked up and down the line, searching his soldiers’ faces. "Luckily for us, we’ve got ourselves a couple of secret weapons."

"Arenvald of the Scions, and Fordola of the Resistance. Echo-blessed, the both of them, so no need to worry about them getting tempered. That said, I’m obliged to divulge certain details regarding the latter..."

He saw their faces darken as they listened—their eyes narrow, their bodies tense. Fordola cocked her head and chuckled. "If I was going to stab you, it’d be from the front, not the back. But don’t worry your little heads—my neck’s still in the hangman’s noose." 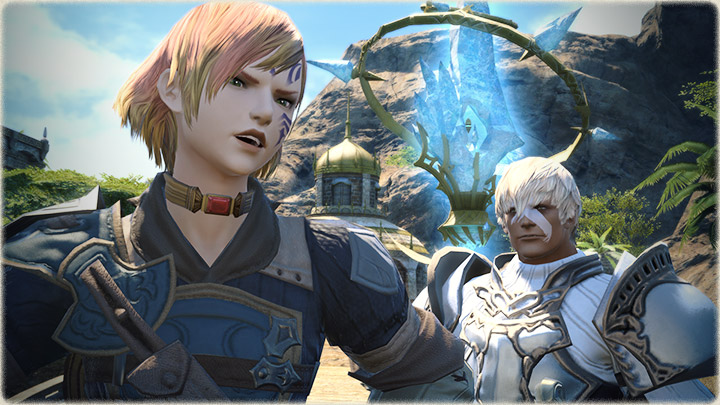 She tapped the gem-inlaid choker below her chin with two fingers. You can trust in words or you can trust in magick. If the Resistance thaumaturge tasked with keeping an eye on Fordola was so inclined, he could trigger the enchantment woven into the neckpiece, causing it to gradually grow warmer and tighter, slowly searing her skin as it choked the life from her. Rather you than me. A proper hanging’d snap your neck, at least.

The captain cleared his throat and continued. "Given their talents, we’ll have them hold Ifrit at bay while the summoner squad engages at range with egi and magicks. You’ll have healers as support, as well as the girl’s minder. I’ll be directing the diversionary maneuvers to the south. Any questions? Right, then."

They left the Forgotten Springs en masse and ventured a few malms east into the Sagolii, before Captain Wolf and his contingent peeled off to lay siege to a nearby Amalj’aa encampment, providing the summoner squad with the distraction they needed to head north towards the Zanr’ak altar undetected. Arenvald then led the way through a narrow canyon, clinging to the shadows some fifty yalms ahead of the party. Spying an oblivious sentry, he gestured for his comrades to stop, and slowly drew his dagger...

Wiping the blade clean, he looked back and signaled the others to join him. As one, they continued north towards the altar, where they found, as they had feared, a ring of flame, and the Lord of the Inferno waiting at its heart. 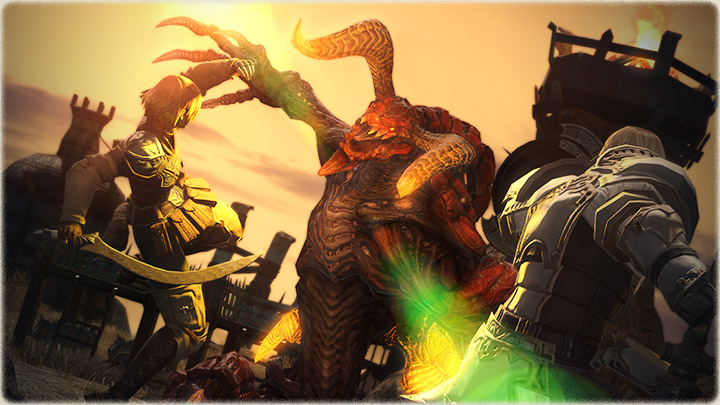 Even in the aftermath, he struggled to remember the fight.

The primal had been summoned with a token quantity of crystals, and Arenvald had not felt a fraction as hard-pressed as he had during the battle with Sri Lakshmi. The summoners and healers had all performed admirably. A victory won on the training ground, not the battlefield.

"We’re finished here. All units, withdraw!" At Captain Wolf’s command, they set out to return the way they had come.

Arenvald was already diving the moment he heard the scream. Peering out from cover, he saw a figure in the dirt clutching an arrow in his gut, its black iron point protruding obscenely from his back. Amalj’aa.

"Stay put and stay quiet. Leave the fightin’ to me and Aulie."

"Enemy archers, west ridge! Get behind those rocks!"

Arenvald closed his eyes, took a breath, and counted to four.

Shafts were raining down all around them now. Raising his shield, he broke and ran towards the summoners to help defend their retreat, and passed Fordola sprinting in the opposite direction, sword flashing as she danced through a hail of arrows.

"I knew it! I knew she’d run!" Jajasamu bellowed with a hint of triumph. Alarm bells ringing in his head, Arenvald looked back and saw she was headed for the wounded soldier—a Resistance man.

But just as Arenvald felt his stomach drop into his boots and the grip of his sword dig deep into his palm, he saw Fordola pull the mage to his feet and offer him her shoulder. And then Arenvald was running again, this time into the open, his silver armor flashing in the sunlight as he shouted curses and threw stones at the archers on the ridge, daring them to face him.

After a time, the arrows subsided, and the archers vanished from sight. Better to leave the madman be, eh? For a moment, he let himself relax.

Arenvald caught the first arrow on his shield and drew his sword in time to cut down the second and third. "Sorry, A’aba," he whispered. The archer, a hulking brute of an Amalj’aa wearing a mask, took careful aim. Bugger it.

With a cry he raised his shield and charged, closing the gap and driving his full weight into his ill-prepared foe. As the archer staggered backward, Arenvald raised his sword and brought it down, cleaving his enemy’s bow in two as he raised it in a vain attempt to ward off the blow. The Amalj’aa crumpled to the earth, and the surrounding sand grew dark and wet. The silence was deafening, and Arenvald knew the champion’s comrades had been watching.

"Bloody hells, that was the stupidest display of ‘heroism’ I’ve seen in years. And they wonder why I hate the young ones..."

Muttering under his breath, the summoner bade his familiar return to him. As the floating mass of rock passed Arenvald, he saw the masked Amalj’aa’s final arrow was lodged squarely in its breast.

The mood in the Flames carriage was worthy of a nameday feast, the summoners all smiles as they chatted amongst themselves and even laughed at some of Arenvald’s jokes. Fordola sat apart from it all, elbows on knees, head bowed, though the Scion thought he spied Jajasamu giving her an appraising look.

Before they had set out, Arenvald had been with her when the thaumaturge wandered over. She had been kneeling in the sand, packing up her gear when he asked why she had risked her life to save his. “Little girls need their fathers," was all she said, before tightening a final strap and boarding the carriage.

The man had turned to him then, his face a picture of perplexity. “I never said anything about having a daughter."

To which Arenvald could only shrug and smile. “Lucky guess."

It all begins with the first step.