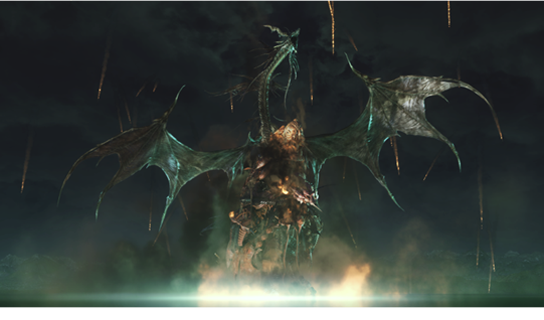 Mor Dhona is an inland region of Eorzea, and the site of the first aerial battle in recorded history—a conflict that took place above Silvertear Lake.

In the Year 1562 of the Sixth Astral Era, five years after the invasion of Ala Mhigo, the Garlean Empire finally rose from apparent inactivity to resume its attack on Eorzea. A fleet of airships was deployed to Mor Dhona, led by the massive flagship Agrius.

As the imperial fleet advanced into the skies above Silvertear Lake, the largest inland body of water in Aldenard, it was met with a wholly unexpected sight. Midgardsormr, the dragon deity of the lake, had arisen, summoned by a hand unknown. And as if to answer the mighty wyrm's call, a host of dragons flew in from the northwestern reaches of Dravania and fell upon the Empire's forces.

The air was filled with the deafening roars of cannons and dragonkin alike. Locked in a deadly embrace, the thunderous impact of Midgardsormr and the dreadnought Agrius tolled their mutual demise. Thus ended the Battle of Silvertear Skies.

Even now, the carcass of the immense wyrm lies entwined with the wreckage of the Agrius in the center of the lake, a towering monument to the ferocity of the conflict.

Ever since that day, the lands of Eorzea have continued an inexorable fall into chaos...