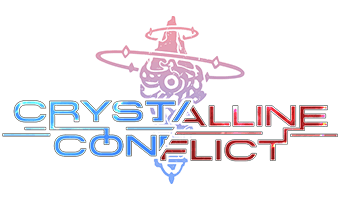 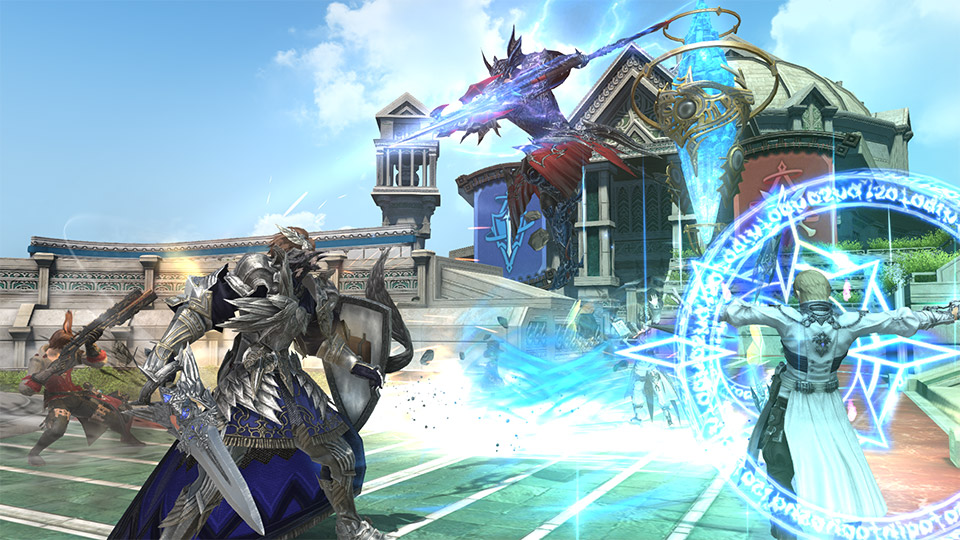 A dazzling array of arenas await at the Grand Companies' glamour-woven tactical training grounds. Designed with adventurers in mind, these strategic confrontations of but few competitors make for a thrilling challenge for newcome pups and Wolves' Den regulars alike.

For information on how to unlock PvP duties, check out the Getting Started section of the PvP Guide.

Players who abandon a Crystalline Conflict match (not including players who join a match in progress or are vote kicked) will receive a penalty. Players so penalized will be unable to use the Duty Finder for 30 minutes.
Players inactive for over a period of two minutes will automatically be removed from play.

Crystalline Conflict matches take place in one of three arenas: the Palaistra, the Volcanic Heart, and Cloud Nine.
The current arena available for casual and ranked matches rotates according to Earth time. 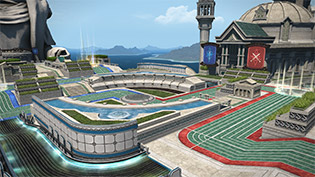 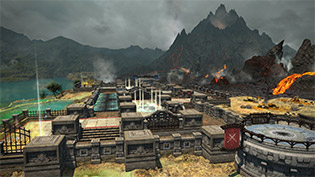 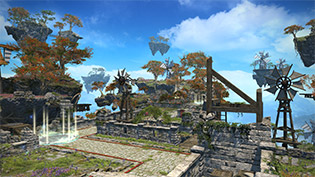 Crystalline Conflict combatants are divided into two teams: Astra and Umbra. Players will then begin the match at their team's base. The match will begin after a 30-second countdown.
* If, for some reason, a player is unable to join and the minimum party requirements are not met when the duty commences, all members in the party will be automatically removed from the duty.

In-game chat is restricted to Quick Chat during casual and ranked Crystalline Conflict matches. Quick Chat messages―found under the Quick Chat tab of the PvP Profile window―can be registered to your hotbar, and display in the party chat log when used.
* Participants can receive but not send messages via free company chat, linkshell chat, cross-world linkshell chat, PvP team chat, and the Novice Network.

During custom matches, all chat channels are available in addition to Quick Chat.

Unlike other PvP challenges, your character's name will display as is in the name settings.

Incapacitated players will be returned to their base, where they will be allowed to rejoin combat after a short delay─however, this delay increases by one second with each incapacitation. Upon reviving, HP and MP will be fully restored and action recast timers reset.

The use of the following is prohibited while participating in Crystalline Conflict:

Both ally and enemy party lists will be displayed during a Crystalline Conflict match. 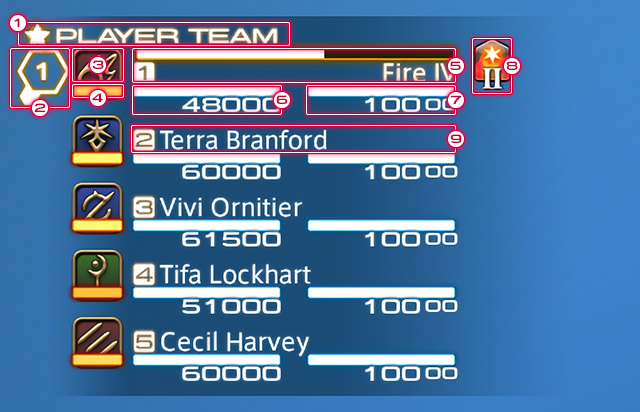 The first team to successfully transport the tactical crystal to the other team's goal, or the team with the highest progress toward the goal within the standard match time will be declared the winner.

* If neither team makes it to the goal within the allotted time, and a member of the team with a lower progress record is present in the tactical crystal's ring when the match times expires, the match will proceed into overtime. 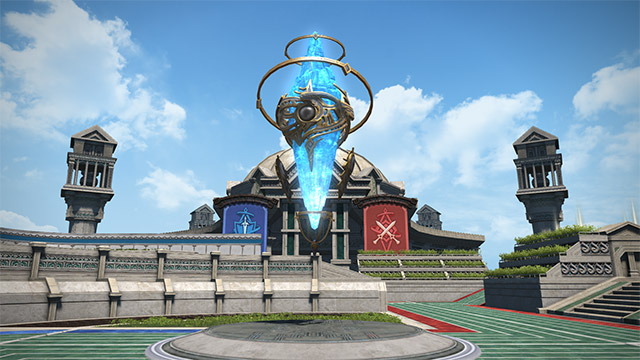 At the beginning of each match, the all-important tactical crystal will be placed at the arena's centerpoint. Should the ring around the crystal's base be occupied solely by members of one team, the occupying team will be able to move the crystal.

The tactical crystal's movement speed will increase if:

The tactical crystal will be bound, and thus unmovable for the first 30 seconds of a match.

The crystal can only be moved along the crystal line─a dedicated path within the arena. 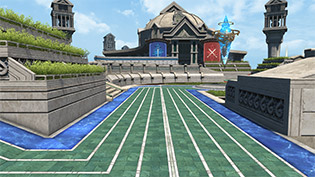 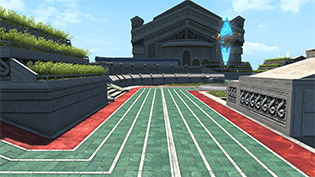 Checkpoints can be found halfway between the centerpoint and each team's goal. Upon reaching a checkpoint, the tactical crystal's progress will be halted temporarily. The team attempting to clear the checkpoint must remain in the crystal's ring to increase clear progress. 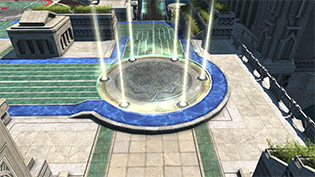 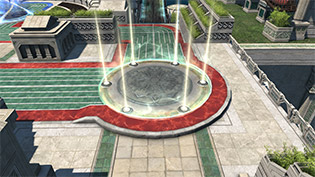 When the Clear Progress gauge reaches 100%, the crystal can once again be moved. Clear progress can be confirmed via the HUD.

Crystalline Conflict match information can be confirmed via the specialized HUD.

Victory conditions during overtime are dependent on each team's progress record as of overtime commencement.
* If neither team can fulfill the overtime victory requirements, the match will end in a draw.

During Crystalline Conflict matches, medicine kits will appear on the field. Access a medicine kit to restore HP. 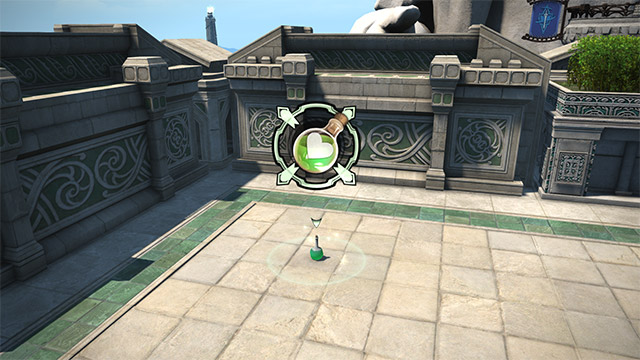 * Players with HP at 100% cannot access medical kits.
* Each kit may only be claimed by one player.
* Once a kit has been claimed, a replacement will be generated after a set period of time has passed.

Both the Volcanic Heart and Cloud Nine are subject to arena events─unique phenomena that occur periodically in each arena. 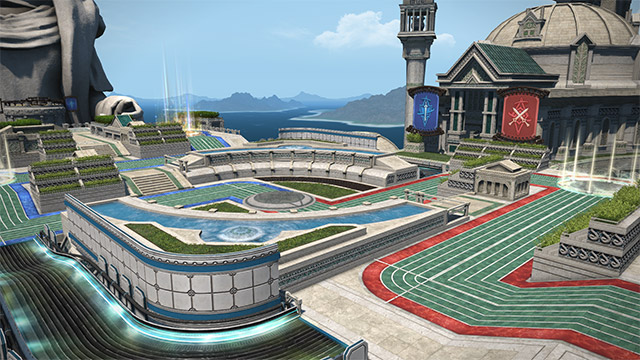 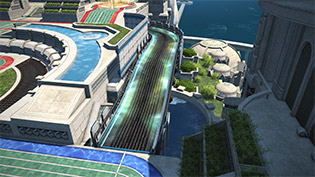 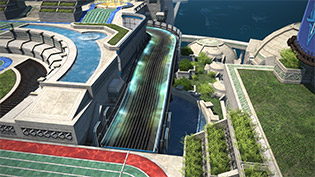 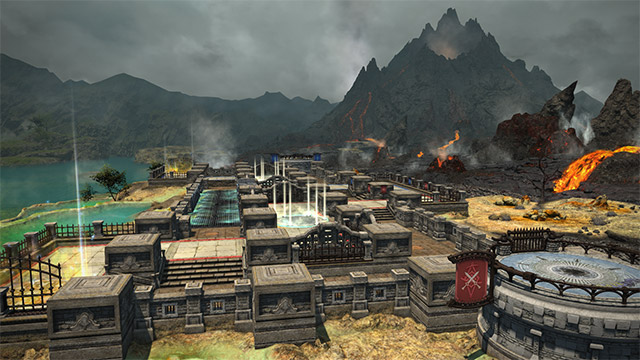 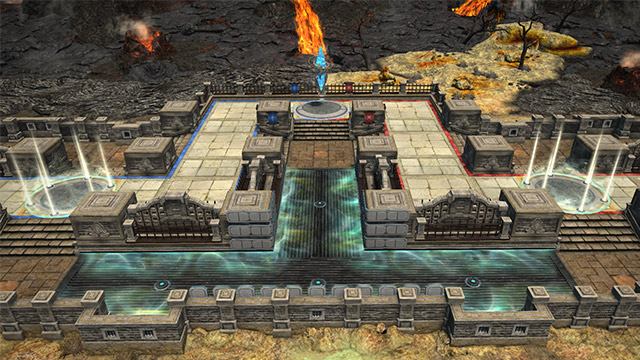 The Volcanic Heart periodically erupts, scattering self-destructing bombs across the field. Those who fail to avoid their explosive radii will take damage. Bomb cores will remain at the site of bombs' destruction, granting those who acquire them the following: 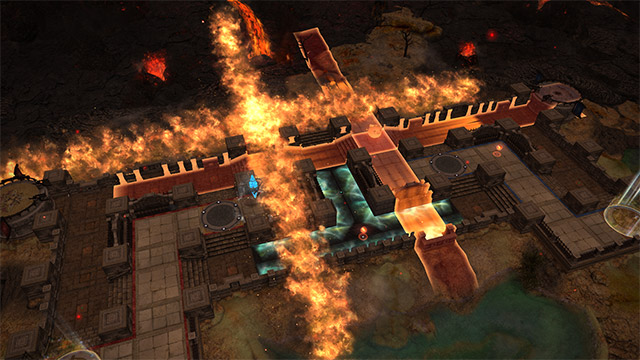 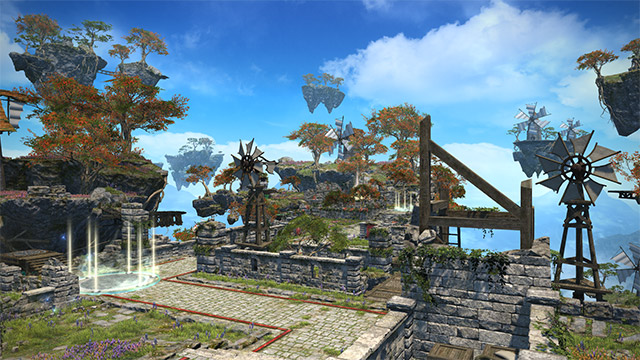 Stepping on one of Cloud Nine's jump glyphs will rapidly transport you to a specific location on the field. 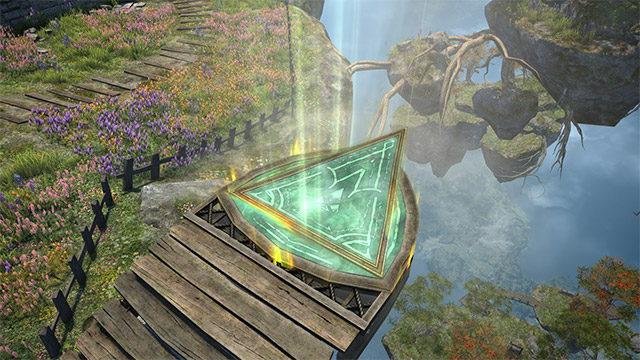 Players cast up into the air by turbulence will take damage upon being returned unceremoniously to the ground. However, they may acquire black chocobo feathers while in the air, granting them the following:

The locations of black chocobo feathers are indicated by markers on the ground. Those who do not wish to go flying can negate the effects of turbulence by using Guard. 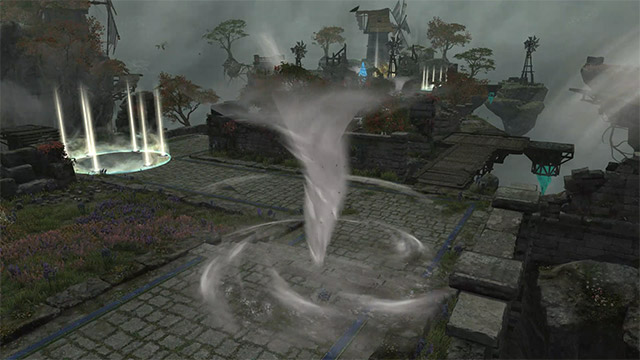 Each tier from Bronze through Diamond is divided into smaller levels called "risers." The number of risers varies by tier.

While rated in the Unranked through Diamond tiers, progress within risers is indicated by Rising Stars. When you win a ranked match, you will gain one Rising Star. Similarly, a loss will remove one Star.
Once you have earned the maximum Rising Stars in one riser, an additional win will allow you to move up a riser.

Winning three matches in a row will apply a streak bonus, netting you two Rising Stars per win.

Once you have reached Crystal, the highest tier, victory and defeat will be reflected by your Crystal Credit, rather than Rising Stars. The amount of Credit you earn or forfeit in matches is determined by the difference in average Credit between your team and the opposing team. Streak bonuses do not apply to Crystal Credit.

PvP ranks will be reset between PvP seasons.

A list of PvP rankings─including tier, victories, and Crystal Credit score─for all players during a season is available on the Lodestone. The page will be updated daily, allowing players to more easily gauge their overall progress.
Log into the Lodestone and select a character to view your ranking information as well as changes to your Crystal Credit over the past seven days. For those in the Crystal tier, the Crystal Credit of the top-ranked player will be included on the graph for comparison.

* The Standings page for each season will be made public the day after the season starts. Standings will not be updated during the pre-season.

Accumulating PvP EXP raises PvP rank. Certain ranks will also award players with special titles.
PvP rank, PvP EXP, and AP are recognized only by the Grand Company through which you earned them; transferring your allegiance means you will have to start over. However, rest assured they will be reinstated to you upon rejoining your former Grand Company.
* Titles earned also differ between Grand Companies.

Earn enough series experience and you'll increase your series level, earning you series rewards. Trophy Crystals earned as series rewards can be exchanged for a variety of items by speaking with the crystal quartermaster stationed at the Wolves' Den.

Wolf Marks obtained in Crystalline Conflict can be exchanged for PvP gear and items by speaking with the mark quartermaster stationed at the Wolves' Den.

Those who perform well in Crystalline Conflict will receive achievements that award special mounts, minions, and titles.

The following chat channels are available during custom matches:

* Both combatants and spectators can freely use the above chat channels.
* The Say, Yell, Tell, and Alliance chat channels cannot be used.
* The Free Company, Linkshell, PvP Team, and Novice Network channels can also be used for communication with players outside of the instance.

After selecting Recruit Members in the Party Finder, select the Custom Match tab of the Recruitment Criteria window.

Recruitment for Team Astra, Team Umbra, and spectators can be done simultaneously, though a spectator group is not required. Please be advised the player recruiting for a custom match will always be assigned to Team Astra. 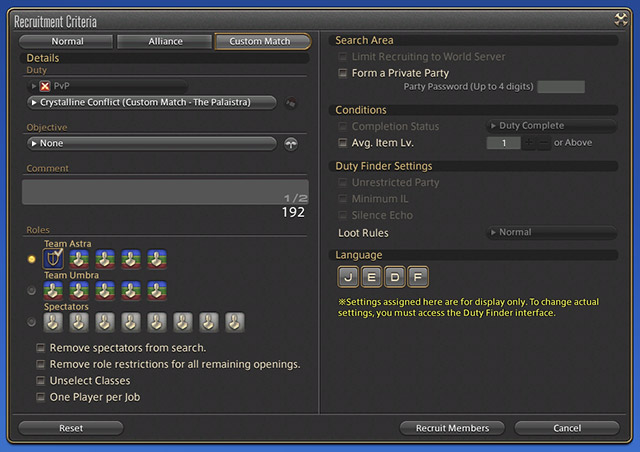 Both the party list and alliance list can be used to check recruitment status. A list of all party members can be viewed in the Social window.

When viewing the list of parties in the Party Finder, icons representing Team Astra, Team Umbra, and spectators will be displayed rather than party roles. These icons will indicate whether or not each party is full.

Select a custom match to view its details and choose whether you wish to join as a combatant or spectator. 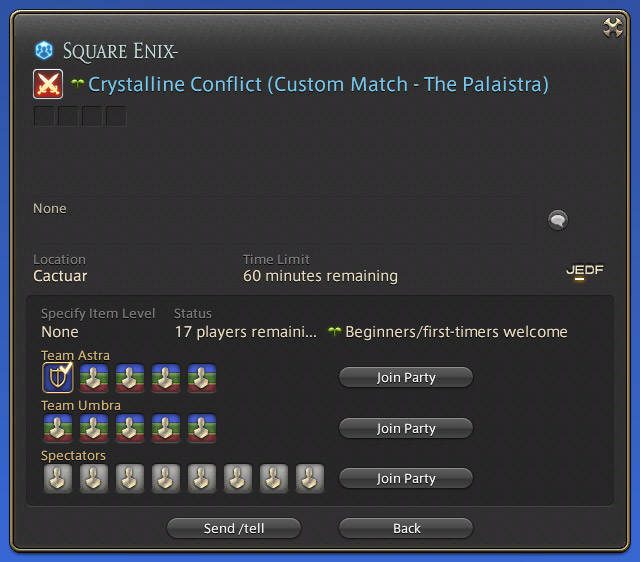 When both Team Astra and Team Umbra are assembled, and you have finished recruiting spectators, you can register for a custom match directly via the Duty Finder.

When registering for a custom match, the party leader can select whether arena events will occur, as well as whether medicine kits will be available during the match.

Players also have the option to spectate custom matches. Once initiated, players will be unable to see their own characters, but instead utilize a dedicated interface to operate the camera and observe the match from various angles and positions. Combatants will be visible to spectators even when under ninja's Hidden effect. 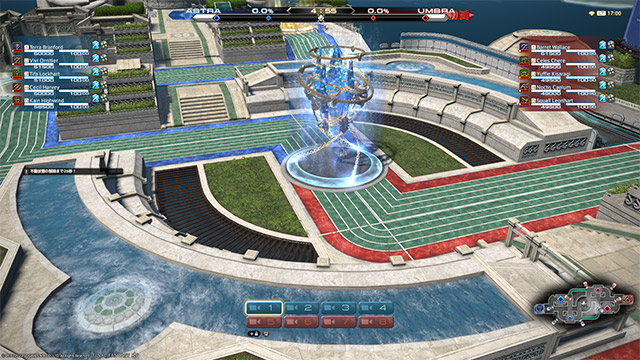 Spectators will have access to three types of cameras:

Players can switch between cameras using the following controls:

Minimap
The minimap displays the locations of the fixed camera and combatants.

View Spectators
Displays a list of all players spectating the current match. 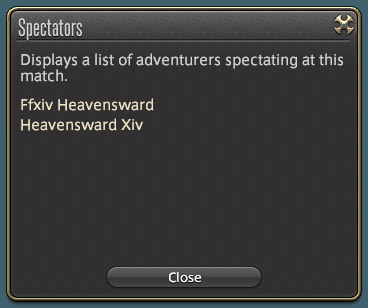 * Spectating players will be removed from the instance when there are no remaining combatants.