The ancient Doman game of mahjong joins the entertainment on offer at the Gold Saucer. Face off against your fellow adventurers or practice against automata, and hone your strategies to triumph in this contest of wits!

Doman mahjong is a game for four players. The following guide covers the basic rules.

2. What is Doman Mahjong?

In Doman mahjong, players race to complete a winning hand of 14 tiles, with points awarded for speed and difficulty of the hand.
Players begin with 13 tiles and draw a new tile each turn. They must then choose a tile to discard: either the new tile or one of the tiles in their hand. The player to the right then takes a turn, and the process is repeated until the end of the hand.

The first player to complete a winning hand is awarded points. A total of eight hands are played in a full match and four in a quick match, and the player who finishes with the most points is declared the winner.
Here is an example of a winning hand:

The 14 tiles form four groups of three tiles and one pair of matching tiles. A group of tiles is known as a "meld," and the various types are explained in this guide. The combination of melds determines the difficulty of the hand and the points awarded when winning.

Mahjong tiles are divided into "number tiles" and "honor tiles."

There are three suits of number tiles, each ranging from 1 to 9.

There are two suits of honor tiles: the four wind tiles and the three dragon tiles. Unlike number tiles, they appear in no particular sequence, and therefore cannot be used to form straights. They can only form melds with identical tiles.

* You can choose from Doman or traditional tile sets.
See Checking Ratings and Settings for details.

Players aim to form a winning hand of 14 tiles before the other players and earn as many points as possible.

A winning hand consists of 14 tiles and requires four melds and one matching pair. 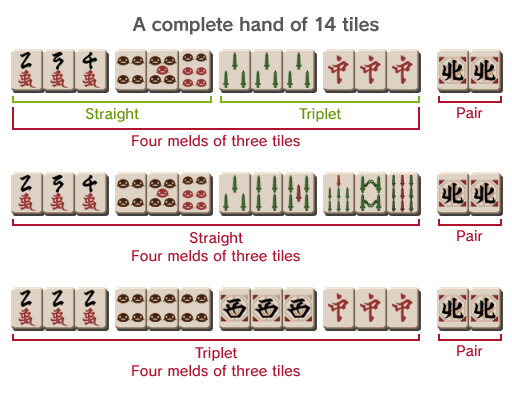 * There are special combinations that ignore this particular rule, but beginners should focus on learning the basic hands first.

Each of the four players begins with 13 tiles, and the dealer─who is chosen automatically─plays first.
That player draws one new tile and chooses one tile to discard. This may either be the new tile or one from their hand.
Once that player has discarded a tile, the player to the right takes a turn. This process is repeated until the end of the hand.
The hand ends when a player calls a winning hand. The hand also ends if all of the tiles are drawn with no player calling a winning hand. 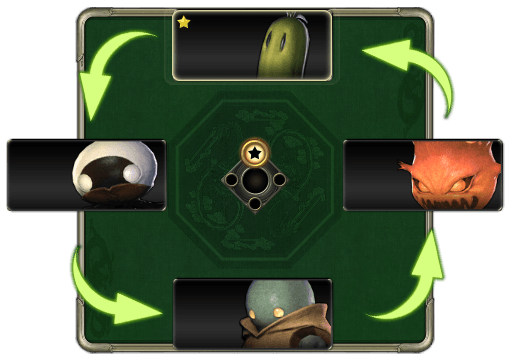 6. Points for a Winning Hand

Each player begins the game with 25,000 points, which increase when calling a winning hand. However, points may be deducted when another player calls a winning hand.

A winning hand can be formed in one of two ways:

1. Tsumo: When a tile is drawn

2. Ron: When another player discards a tile

The dealer has the advantage of earning 50% more points from a winning hand.
In addition, when a dealer calls the winning hand, the role of dealer does not pass to the next player, thus giving the dealer an opportunity to score even more points.

7. Yaku, Required for a Winning Hand

As mahjong revolves around scoring as many points as possible, it is important to know the difference between low-scoring and high-scoring hands.
The value of a hand is determined by "yaku"─specific combinations of melds. The value of each yaku is measured in "han," with 6 han being the highest and 1 han the lowest. The harder the yaku is to form, the more han it is worth.
The han value of the hand is used to calculate the number of points awarded.
Points are awarded as follows:

In certain situations, further calculations are involved which may lead to point increases.
As yaku are used to calculate the points earned, a winning hand must contain at least one yaku.
Although a winning hand normally requires four melds and a matching pair, this alone does not constitute a winning hand.

There are many types of yaku, but we recommend learning these basic yaku first:

Only number tiles from 2 to 8 are used.
The hand cannot contain any honor tiles or tiles numbered 1 or 9.

Number tiles from a single suit plus honor tiles.

Only number tiles from one suit.

There are many other kinds of yaku. For a full list of those used in Doman mahjong, refer to the yaku list.

A special condition known as "riichi" makes it easier to form a yaku.

The hand in the diagram only requires a 3 or a 6 of Dots to form a winning hand.
When a player is one tile away from a winning hand, riichi may be declared.
When the hand is ready for declaring riichi, the player will have the option to do so before discarding a tile. In the case shown in the diagram, if the declaring player receives a 3 or a 6 of Dots, whether the tile is drawn by the player or discarded by another player, a winning hand can be called.
After declaring riichi, that player can no longer put drawn tiles into their hand. Any tiles drawn will automatically be discarded until a tile that completes the winning hand is obtained. However, a winning hand achieved through riichi is a yaku in itself. Therefore, the player does not need to have formed any other yaku to complete a winning hand.

1. The player's hand automatically becomes a yaku, regardless of whether it contains any other yaku.

2. The other players know that the one declaring riichi is one tile away from a winning hand.

3. The declaring player cannot replace any of the tiles in their hand.

4. The declaring player must pay 1,000 points─indicated with a point stick placed in the center of the table─which go to the winner of the hand.

The honor tiles offer another method for forming a yaku.

A triplet of any of these three tiles forms a yaku.

The wind tiles can be used to form a yaku in a similar fashion, although certain conditions apply.

A game of Doman mahjong is divided into eight hands. The first round, in which the role of dealer passes to each player once, is called "East." A triplet of east wind tiles forms a yaku in this round. The second round, "South," allows a yaku to be formed with a triplet of south wind tiles.

Each player is assigned a "seat wind" according to their seating position in relation to the dealer. 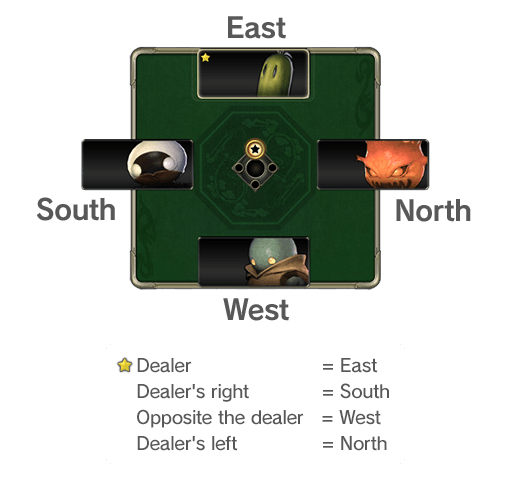 The seat wind for each player changes counterclockwise in this order: East, South, West, North. (This layout differs from the standard compass directions.) A triplet of wind tiles with the current seat wind forms a yaku.
The seat wind rotates together with the role of dealer, and players have a chance to easily form a yaku by paying attention to their seat wind marker.

It is difficult to form a winning hand relying solely on drawn tiles. However, tiles discarded by other players can be claimed by using "pon" and "chi."

If you have a pair of matching tiles, when another player discards a tile that can be used to form a triplet, you may call pon to claim the tile.

Calling chi allows you to claim a number tile discarded by another player and complete a straight. However, it can only be called for the player whose turn comes before yours.

Although pon and chi allow you to form a winning hand more quickly, there are some drawbacks.

It is not possible to declare riichi after using pon or chi.
Due to being unable to form a riichi yaku, you must find a way to form a different yaku. There are also certain yaku that can only be formed on the condition that you have not used pon or chi, so these will also become unavailable. In some cases, pon and chi will limit your ability to score points.

In each hand, certain tiles are selected as "dora" and will grant bonus han simply for being included in a winning hand. While dora apply han bonuses, they are not in themselves yaku, so a yaku must be formed in order to take advantage of dora.

A dora tile is randomly selected at the start of each hand and is displayed throughout.

Each suit contains four number 5 tiles. One of these four is colored red, and is known as the "aka dora." Simply including an aka dora adds one bonus han to a winning hand. There are three aka dora in total, one for each suit.

Since there are four of each tile, it is possible to collect all four. This is known as "kan."

Although kan is not in itself a yaku, it awards additional bonuses when calculating the points earned by a winning hand. Kan also increases the number of dora, which may offer further advantages.
Similarly to pon and chi, calling kan locks those tiles, preventing them from being replaced or used in other melds.

Doman mahjong is a complex game even once you have learned all of the rules. However, many of the actions normally carried out by players themselves are performed automatically, so feel free to head to the tables and try your luck without worrying about the less important details. Why not start at the novices' table?

Once you have a grasp of the basics, you may wish to challenge other adventurers via the Duty Finder.