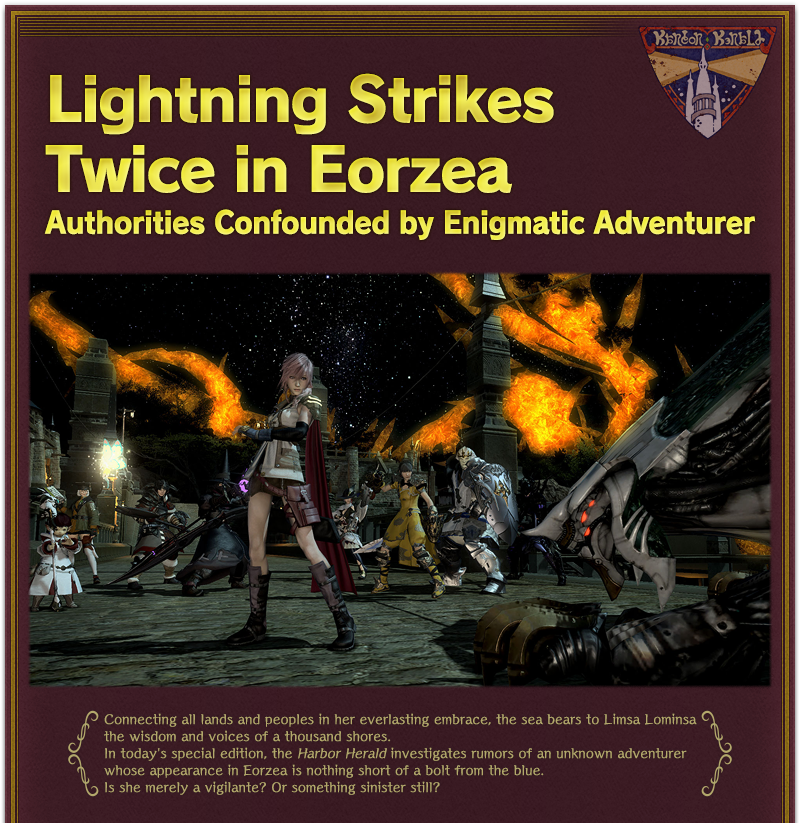 Taverns across Eorzea are abuzz with talk of a mysterious warrioress slaying creatures then vanishing as quickly as she appears. With rumors spread so far and fast, I thought this was perhaps the foretelling of another great adventurer, an heir to the Warriors of Light. Brief dialogues with those who have glimpsed upon her, however, have regrettably left me with more questions than answers.

When asked to describe her appearance, my informants swore that her garments were unlike anything ever to be woven or forged in the realm. More concerning, however, was her weapon—a strange blade that also serves as a firearm. Far be it from this humble scribe to question one who would protect Eorzea's people, but only the Garlean Empire has been known to wield weaponry of such bizarre form and function. Coupled with battle prowess said to leave even the most accomplished of adventurers in awe, one cannot help but wonder where her allegiance lies.

Under the assumption we are dealing with an adventurer whose exploits have remained unnoticed, I took it upon myself to consult with the Adventurers' Guild. Surely, I surmised, a heroine of such high caliber would have registered with the guild before running headlong into dangers unknown. And yet, no matter which branch of the Adventurers' Guild I visited, the answer was the same. No one in their records matches the description of this nameless crusader.

With so much left unanswered, there is perhaps no better place to unravel this mystery than on the battlefields where she is said to appear. Stay alert on your travels, dear reader, that you may find the answer to the burning question on everyone's lips.