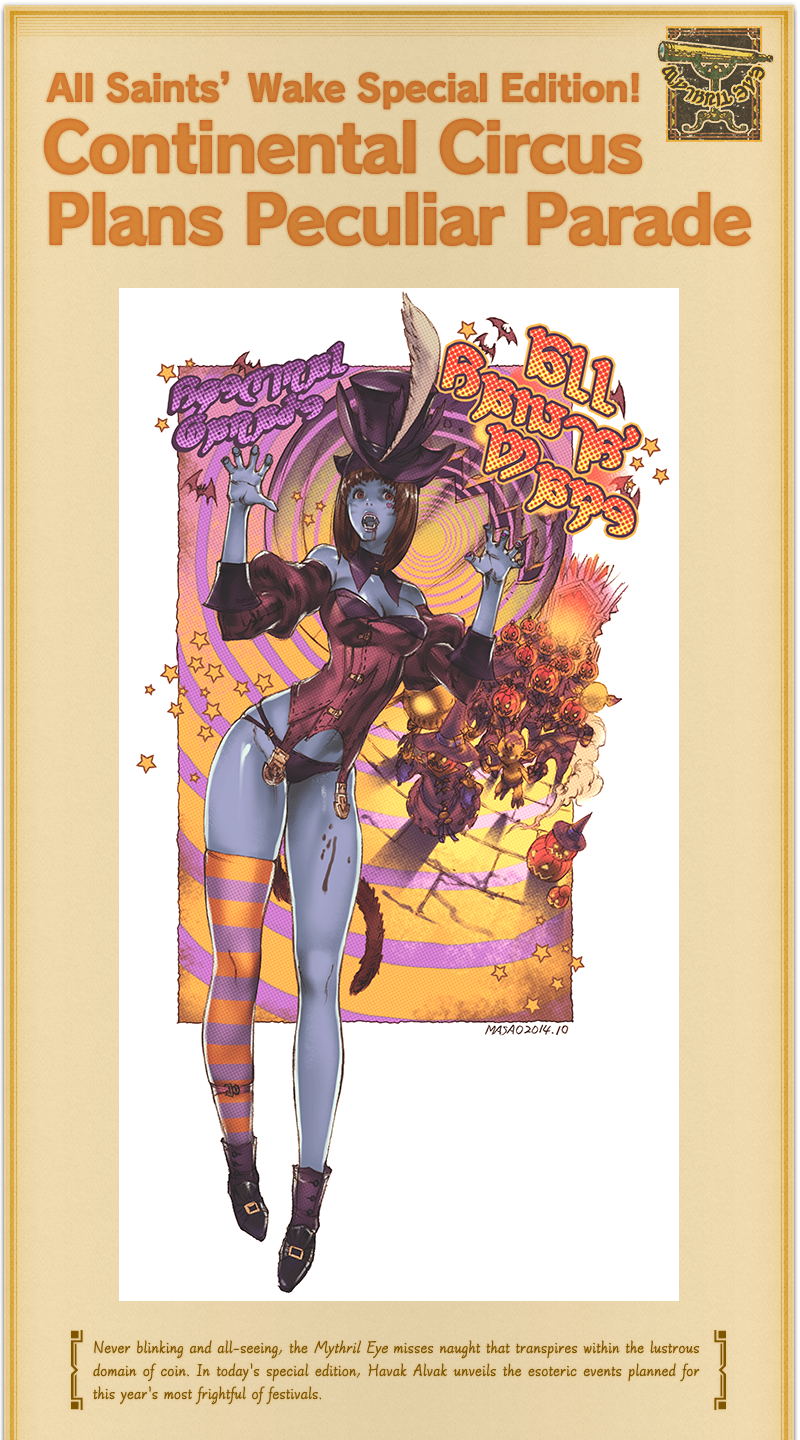 Touring Theater Troupe on the March

The sands of time drift ever onward, and bring us once again to the harvest season. Legend has it that, as the ripening crops bent the boughs below, the Twelve would summon the saints to a great banquet in the celestial realm to honor their virtuous deeds.

Meanwhile, bereft of their guardians, the people grew fearful of the beasts and bogles that dwelt in the darkness. The terrified townspeople would hurry home as twilight fell, and tightly bolt their doors and windows. Those souls who dared venture into the night would don grotesque disguises to better blend in with the shades who stalked the streets. So it was that All Saints' Wake came to be.

But those days of dread are dead and gone. Thanks to the energetic endeavors of adventurers, the boisterous beasts that once ran rampant are kept at bay. Townspeople can sleep easy at night, in complete confidence that no slithering specter will strangle them in their sleep. Once a byword for terror, All Saints' Wake has become a joyous jamboree, with mischief and mirth in equal measure.

This transformation is due in no small part to the Continental Circus, a traveling troupe of mummers committed to making All Saints' Wake a holiday to remember. Donning devilish disguises, they tour the land, performing playful pageants of conjury and illusion, bringing chills to spines and smiles to faces wherever they go.

Your humble reporter has it on good authority that, as part of this year's celebrations, the circus will be holding a spine-tingling costume parade on the Steps of Nald. A source close to the circus described how volunteers will be transmogrified into fantastic forms matching those of the performers, and process down Emerald Avenue, bringing fear and cheer to all in their wake. The hair-raising horde will be led by a member of the troupe dressed as an ogre pumpkinhead, the legendary Great Gourd said to muster the maleficent masses during All Saints' Wake.

The troupe is seeking the assistance of able-bodied adventurers to ensure the parade is the biggest and best it can be, and the organizers anticipate a record turnout. The plans are sure to be a boon to tourist and trade alike, as local businesses brace for an influx of moneyed merrymakers.

But remember, dear readers—this preternatural parade won't last forever. So rally your relatives, muster your mates, and head to Ul'dah to see the spectacle for yourselves!