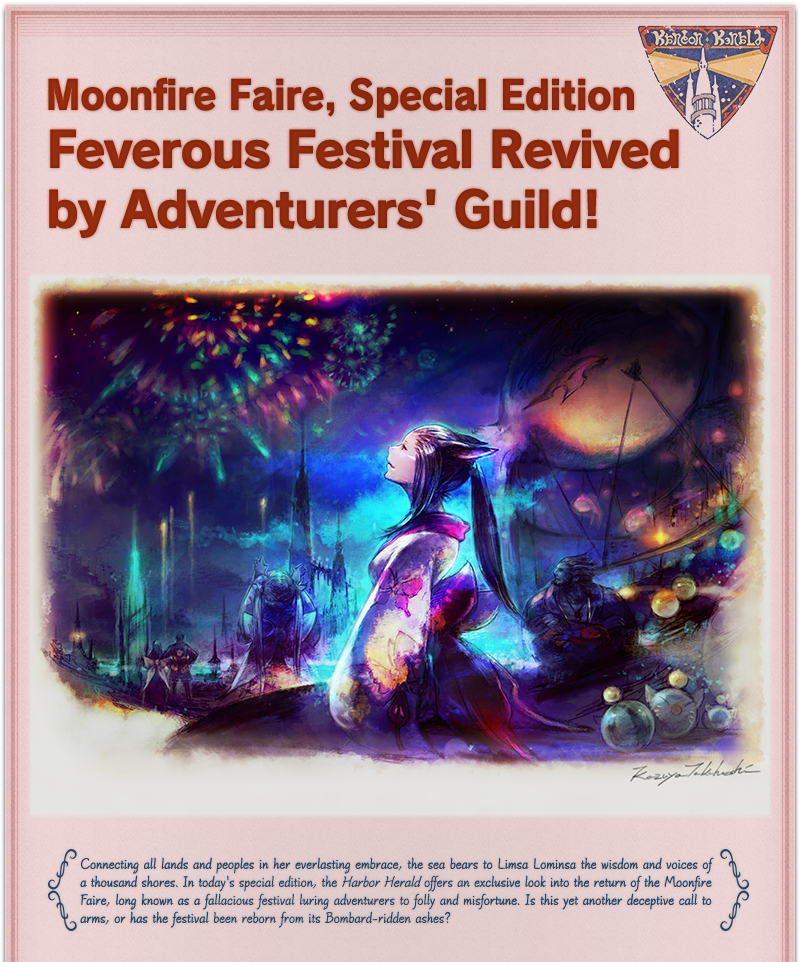 At last we welcome the tidings of summer─the warm glow of the sun, glistening in the crystal blue waters of the Rhotano Sea; the chirping of birds and the humming of busy bees; and the festivals by which we celebrate the season. Though a time for mirth and merriment to be sure, summer also gives us pause, for the memories of Bombards and their onerous assaults still burn brightly in the minds of many and more.

Given time, these fiery visions of the past would fade, but not before the Adventurers' Guild announced the revival of the Moonfire Faire. With nary a Bombard in sight, the people of Eorzea are baffled by its return. As the premiere purveyor of truth in Limsa, it is the duty of the Harbor Herald to dispel the fog of rumors that clouds the guild's motives.

After speaking with several members of the Adventurers' Guild, it would appear that a fellow by the name Haermaga is behind the festival's return. In fact, my sources say he has donated a fair deal of his own coin for its funding. But why go to such great lengths to rekindle the flames of a festival that has long since lived out its purpose? I asked this very question to a representative of the Adventurers' Guild.

As you may know, the Moonfire Faire was first held five years ago as an initiative to drive out an incursion of Bombards─fiery fiends that meant to reduce the realm to ash. Although the foul creatures have not returned, the Moonfire Faire was, in a manner of speaking, always meant to be a joyous occasion. We feel that is reason enough to hold a summer celebration. A host of events are planned for this year's faire, giving townsfolk the opportunity to better acquaint themselves with the guild, and see what it truly means to be an adventurer. There is more to our work than battle and spoils, and hopefully the people of Eorzea will come to understand that.

They claim this to be an appeal to the masses, but the allure of the faire in previous years was just as sweet. Lacking the impending threat of fiery oblivion, we can only wait and see what surprises await in this year's Moonfire Faire.