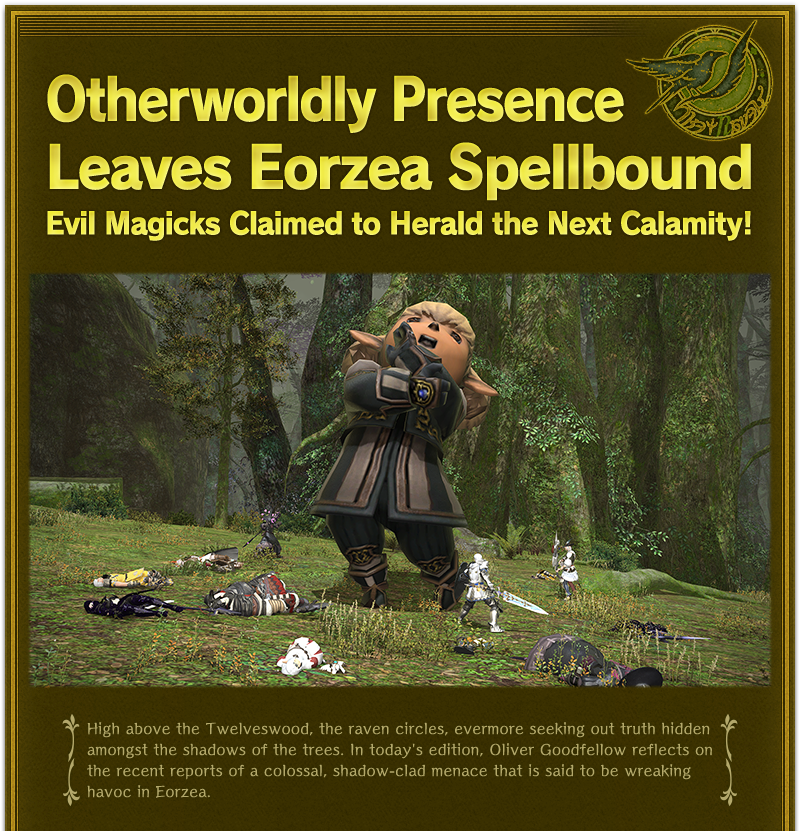 Toil and Trouble Brewing in Eorzea

Five years past, Eorzea was gripped with terror as Dalamud, a prison once thought to be one of Hydaelyn's two moons, began its inexorable descent upon her people. Day by day this celestial body grew larger in the sky, the people became more restless, and the Garleans ever bolder. Eorzea's leaders made a valiant effort to forestall the coming cataclysm, but nothing could prevent the unleashing of Bahamut, and the Calamity that would forever alter our realm.

Why do I now recount this grim chapter in our history, I hear the inquiring reader ask. The answer is an unnerving one─rumors of late would lead me to believe that another Calamity might not be far off in the coming. Strange happenings not unlike those that did presage the end of the Sixth Astral Era have been reported in all corners of the realm. More dreadful still, an ominous shadowy figure has been sighted at the eye of these sorcerous storms. Though none who gazed upon this fiend in truth have lived to tell the tale, rumors speak of maniacal laughter─a spine-chilling cackle─that can be heard from malms away.

While the locals live in fear of vast and imminent destruction, officials claim this is merely a plot of Garlean origin─a diversion, if you will. Although I am wont to disagree with this assertion, let us suppose for a moment that this is indeed the case. Before the release of Bahamut, harbinger of the Seventh Umbral Era, the realm experienced a number of otherwise inexplicable phenomena. From rains of fire to strange behavior in wildlife, Dalamud's influence reverberated deeply within the realm, and its fateful descent can be traced back to the Garlean Empire, and the scheming of one Nael van Darnus. Would it not stand to reason that these telltale signs pose a threat that demands swift investigation? That if left unchecked, this simple plot may once again reshape our realm for the worse?

There is no question in my mind that powerful forces are at work here. But alas, mine is the realm of pen and paper, and such matters are beyond my power. To that end, I would ask any willing adventurer who reads these words to hear my plea. Seek out the truth of these otherworldly disturbances, that the truth may put our realm at ease.