Conrad's shoulders sagged as he sighed and muttered under his breath. Cursing the gods or himself? M'naago watched his eyes. They looked past her, past everything. What do you see? The faces of the poor bastards you ordered to East End, I'll bet. Some of our best.

None had survived the ambush.

The Ala Mhigan Resistance comprised countless factions, and the people of Rhalgr's Reach were but one. By its nature, it could never truly be defeated by the imperial army. Nevertheless, the loss of so many experienced soldiers, some of whom had fought for nearly twenty years, would be keenly felt. Even a bloody novice like me can see that. M'naago cleared her throat.

"We don't know if the imperials found the tunnel, sir, but even if they didn't...without our men to guide them, our friends from Ul'dah are likely stranded."

Out of the corner of her eye, M'naago spied Meffrid, frowning. Well, if you're not going to say it...

"Sir, if I may...who are these people, and why are we risking so much to get them on the wrong side of Baelsar's bloody Wall?"

The obvious question was answered with folded arms and furtive glances. After a time, Conrad spoke.

"They're Scions of the Seventh Dawn. Old friends. One is the daughter of Curtis Hext."

The voice of the rebellion? The man who spat in the mad king's eye? M'naago wasn't sure what answer she had expected, but this wasn't it. Bloody novice indeed...

"Name's Yda," Conrad continued. "After the occupation, she fled to Sharlayan. Learned a lot there, I'm told, but she never forgot about us. Yda's been assisting us for years now, as a Scion."

M'naago had heard about the Scions. The "Saviors of Eorzea," some had called them. But they had become embroiled in the political machinations of Ul'dah's elite, and now people were saying that they had assassinated the sultana. It seemed that Yda and her companion had reached out to the Resistance seeking a means to escape justice. The East End squadron was their last hope...

"Nothing for it but to go and get them ourselves," Conrad said.

The leaves twisted and twirled as they tumbled to the ground, traced by two pairs of eyes in the brush.

"All this for two people. It's not like him."

M'naago knelt, an arrow notched in her bow, trying desperately to ignore her own heartbeat. Gods, I hate the waiting.

"Trust in the old bear. He wouldn't take the risk if it wasn't worth it."

Meffrid, who had been tasked with training M'naago, was ever the voice of reason. He had told her before of how the Scions were instrumental in the Eorzean Alliance's campaign against the XIVth Legion─of how their forces had led an assault on Castrum Meridianum during Operation Archon, in which Gaius van Baelsar was killed. Such powerful allies would be invaluable in enlisting the support of the Alliance, without whom they could not hope to liberate Ala Mhigo. M'naago scowled. 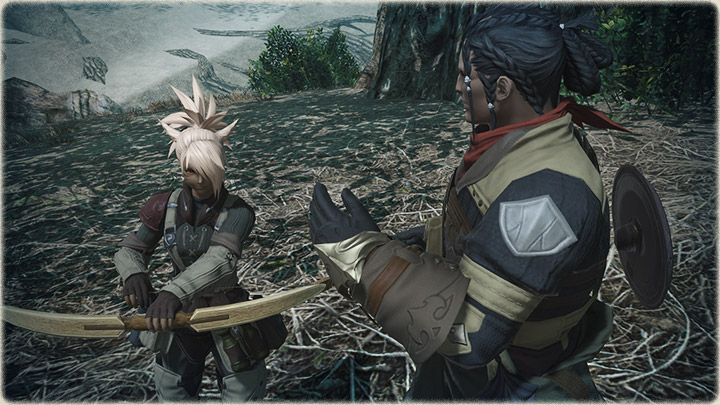 Meffrid glanced at her sidelong, then sighed.

"Just between us, I reckon he's got a mind to recruit her. Maybe even groom her for a leading role."

"Think about it. The daughter of a revolutionary hero, returned to fight for her homeland's freedom? Now that's a tale that'll move men's hearts. That's a banner people'll flock to."

A bard's tale, aye. Some girl who's been away for twenty years. Just what we need.

"Symbols have power," he continued. "Heard of the Griffin?"

She nodded. Mad bastard and his Masks are preaching bloody vengeance to all and sundry. None knew his true identity, though some claimed he was a distant relative of Theodoric. Some even thought that was a good thing. Anyone's better than the Garleans, eh? Sod that. We've had enough of kings.

A hawk's cry rang out.

The pair broke cover and ran towards the rocks. The entrance was well concealed and showed no signs of recent use. A short while later, as they crawled on their hands and knees through a narrow tunnel dug more than a decade before, M'naago recalled stories of imperial sabotage and bodies buried beneath a mountain of earth and stone. She thought of Conrad and the others. Fighting right now. Dying right now, maybe.

You'd better be worth it.

The pair were in a bad way when they finally limped into the Reach. And what a pair they were. Bleeding and bickering, still fuming over some great betrayal back in Ul'dah, worried sick about their comrades, from whom they had been separated in the chaos. But a week at the Barber's did wonders for their disposition. To a point.

Papalymo, the thaumaturge, invariably assumed he was the cleverest person in the room─an attitude made all the more annoying by the fact that he invariably was. Yda, on the other hand, was reckless and impulsive. Emotional. But she had a way with people─a way of making them smile and think everything was going to be all right...

Both the Scions were eager to lend a hand and repay the Resistance, and it was not long before M'naago came to view them as friends and comrades-in-arms. But when she thought back to what Meffrid had said about Conrad's designs─about grooming Yda as a leader, she just couldn't see it. Not yet...

It was a day like any other. M'naago and Yda had been tasked with reconnoitering Castrum Oriens, and were preparing to return home when a high-pitched wail cut through the silence.

The villages in East End had long been abandoned, and only imperial soldiers traveled the roads. No one in their right mind ought to be out here...

Yda was already running. Godsdammit. M'naago tried to keep up, then settled for trying to keep her companion in sight.

After running what felt like malms, they arrived at the foot of a great tree. Lying at its roots was an older man, unconscious, bleeding from countless wounds. He was wearing Resistance colors. Before him, a little girl stood sobbing. Followed the trail of blood, did you...? 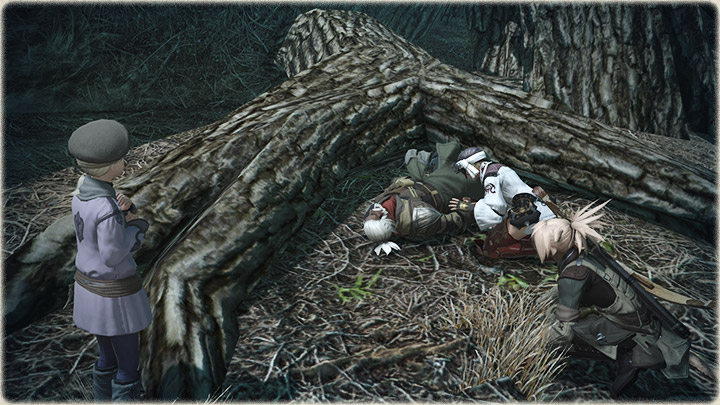 "Seven hells, I think he's one of the squadron we dispatched to meet you a month back! I thought there were no survivors."

Yda knelt beside the man and began tending to his wounds. "There'll be time for questions later," she said, without turning. "Take the girl and head back to the Reach."

"Papalymo told me about this tactic. He's bait. The imperials probably heard the girl too. They'll be here any moment."

"Then we've got to get out of here! Both of us! That or we both stay and fight!"

"The girl's not part of this. Someone has to take her. And this man's one of ours. We can't just leave him here!"

M'naago glared at Yda. Three fighters─one at death's door─and a crying little girl. All in the shadow of a bloody castrum.

M'naago grabbed the girl by the arm and tried to drag her away. She simply stood there, frozen. Godsdammit it all. M'naago scooped the child up and flung her over her shoulder.

And then she ran.

M'naago wound her way north through the forest, her mind racing. Get the girl to safety, call for reinforcements─ Movement!

She ducked behind a tree and strained to listen.

"She can't have gone far!" shouted a voice.

The woman wore hunter's leathers and had a bow slung across her back. She stared when she first saw M'naago, but ran towards her when she recognized the girl cradled in her arms. She tried to thank her as she took the girl from M'naago, but the scout had already turned and started running back the way she had come.

Bodies lay strewn about the clearing. Men and women clad in steel and black cloth. A whole patrol...

They were all dead.

Carefully, she stepped over and between them, eyes fixed on the sole figure that still stood, streaked with mud and blood and panting like a feral beast.

Time seemed to stand still for a moment...then Yda let her arms fall to her sides and sank to her knees, her face a picture of dismay.

"Papalymo's never going to let me hear the end of this."

And indeed, the thaumaturge would chastise Yda when they returned to Rhalgr's Reach. Nor could she blame him. It was stupid and reckless and impossible to justify, and yet... And yet...

Days later, after Yda had time to recover, M'naago found her one night standing at Starfall's shore and staring up at the Destroyer. She asked the Scion, then and there, if she would consider joining the Resistance. But Yda refused.

"Funnily enough, you're not even the first person to ask. I said no to Conrad too."

"But why? This is your homeland─this is your fight! I mean, for godssakes─you're the daughter of Curtis Hext! People'll follow you, don't you see?"

Yda bowed her head, then looked again to the towering statue of Rhalgr.

"I'm his daughter─not him. I may not know a lot of things, but I know that's not enough."

M'naago opened her mouth to protest, but couldn't find the words.

"Papalymo and I have still got friends out there. Good people we've fought beside time and again. After we find them, we'll work together to make it right."

She turned to her and smiled.

"That's all that matters in the end, isn't it, Naago?"

At first, she wasn't sure how to respond. But M'naago found herself smiling back. What does it matter what we call each other, she thought─both then and later, when Lyse told her the truth about her sister and the mask and everything else.

You're still the same woman. The same friend. I'll fight with you. 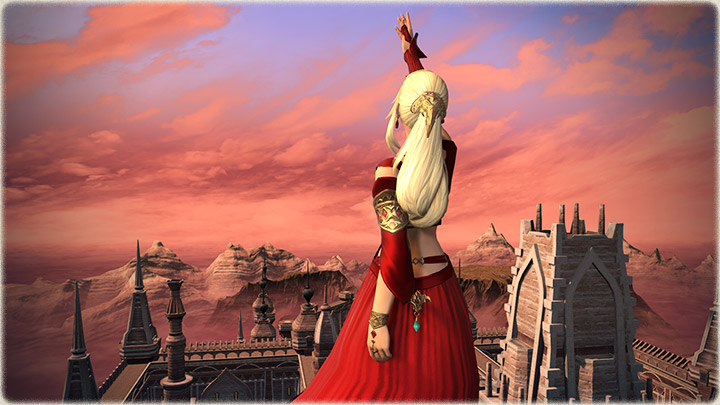