Patch 2.35 brings a multitude of additions and refinements to Eorzea, including new beast tribe quests, colored plumage for chocobo companions, changes to the Hunt and spiritbonding, and more!

With the addition of the Ixal beast tribe quests, a new beast tribe settlement and vendor has been added to the North Shroud. The wares offered by the Ixali vendor can be purchased with Ixali Oaknots, a new form of currency. 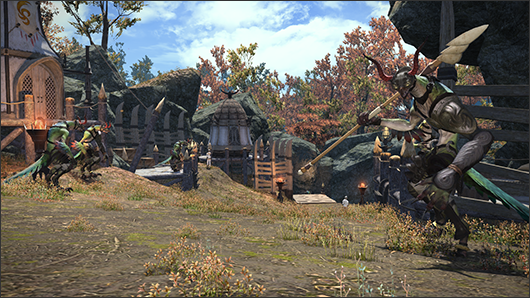 
Side Quests
Beast tribe sidequests can be accessed after completing the following main quest:


Ixal – Reaching for Cloud Nine
In addition to normal daily quests, players can also undertake delivery quests from the Ixal tribe. Three normal daily quests and one delivery quest will be available for each reputation rank every day (Earth time).
* Inclusive of those issued by other beast tribes, players can only accept a maximum of six quests per day.


Daily Beast Tribe Quests
The Ehcatl Nine, a group of outcast Ixal, labor to build the airship Dezul Qualan so that they can return to the Ixal's lost paradise. Adventurers will be called upon to aid them by crafting the necessary components.


Delivery Quests
As the name suggests, delivery quests differ from normal story quests in that to complete them, players must delivery various requested items. You will earn quota points for each item submitted during a delivery quest. Only by earning enough points will you meet your quota and complete the quest.

The quota which must be met to complete the quest will change depending on your reputation. Please be advised that your quota will increase if your reputation rises while undertaking a delivery quest.

A list of requested items can be viewed by selecting Timers located under Duty in the main menu, which will be renewed daily at 8:00 a.m. (PDT) (Earth Time). Please be aware that changes to the list may render certain items undeliverable until a later time.

Upon completing a delivery quest, players will be awarded experience points to the Disciple of the Hand class associated with the quest item. The class is indicated via icons on the list of request items in the Ehcatl Nine Delivery Quests window of the Timers interface.

A maximum of one delivery quest can be undertake per day (Earth time). Upon either completing or abandoning a quest, you must wait until the next day before a new quest becomes available. In the event a delivery quest is abandoned, daily quest allowances will not be refunded.

In order to craft the items required for Ixal quests, players must make use of special crafting facilities. After obtaining the required materials in the course of the quest, the player must then present them to the workshop supervisor before using their crafting facilities. After preparing the workspace, the supervisor will then furnish you with the exact amount of materials required for your task, and you will be granted access to the facility for a limited amount of time.
* If time runs out in the middle of synthesis, that attempt will be deemed a failure.

In addition to the special crafting facilities, players must also equip a pair of Ehcatl wrist gloves, which can be acquired early in the course of the main quests. With the Ehcatl wrist gloves equipped, select the recipe designated by your quest from the Beast Tribe section under Special Recipes in your crafting log to begin synthesis.
* Players must also fulfill quest requirements before they can begin crafting the abovementioned beast tribe recipe items.

In the event you run out of time, your synthesis fails, or the item quality is not that requested by the quest giver, speak with the workshop supervisor to receive additional materials and resume your crafting attempt.

Coinciding with the above adjustments, the abovementioned items can now be sold to NPC vendors.


The option to undertake supply and provisioning missions is now the first option to appear in the query window when speaking with the personnel officer at your respective Grand Company's headquarters.
A confirmation window will now be displayed before leaving a free company or discharging a free company member.
Housing
Free company members can now be discharged even if they have purchased private chambers or have stabled a chocobo.
In the event a player discharged from a free company has purchased a private chamber, rights to said private chamber will be relinquished automatically, and any furnishings held within will be removed. Furthermore, any chocobo stabled by players discharged from a free company will also be removed automatically.
Chocobos automatically removed from chocobo stables will only retain changes to their name and feather color since the last time they were stabled. Any experience points gained through training since the last time they were stabled will be lost.
* Further details on changing chocobo feather color will be outlined below. 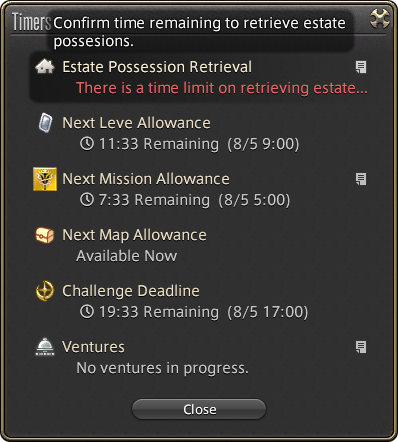 Chocobos automatically removed from an estate's chocobo stable will be entrusted to the Housing Enthusiast NPC.


The option to purchase private chambers will now appear at the bottom of the query window when accessing the interface to move to private chambers.
The following items can now be grown via gardening:
Xelphatol Apple / Doman Plum / Mamook Pear / Valfruit / O'Ghomoro Berries / Cieldalaes Pineapple / Han Lemon


Players can now feed stabled chocobos snacks.
The option Feed my chocobo has been added to the Chocobo Stable interface under Tend to My Chocobo. By selecting this option, players can feed their chocobo any of the following fruits:


The Chocobo Stable interface has been adjusted as follows:
The option Rename my chocobo has been added.
Players can now use subcommands to view details of other free company members' chocobos.
In the event a chocobo can no longer receive experience from training, its rank will now appear in orange.

A star will now appear next to a chocobo's rank in the Companion interface for every rank gained past the initial level cap.
This change will make it easier to discern when your chocobo has reached the rank cap.


A Skywatcher NPC is now available in every major region.
By speaking with a skywatcher, he or she will inform you of current weather conditions for all regions, as well as forecasts for the next eight, sixteen, and twenty-four hours.

Skywatcher NPCs can be found at the following locations: 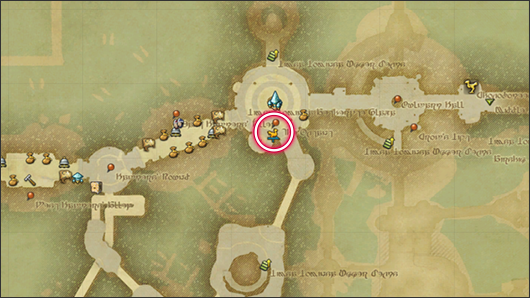 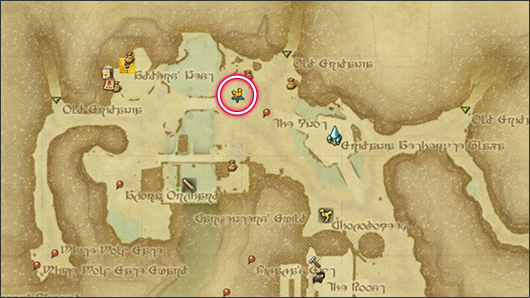 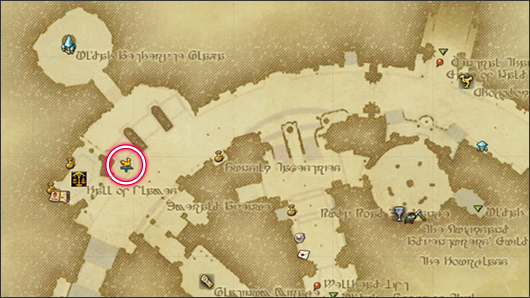 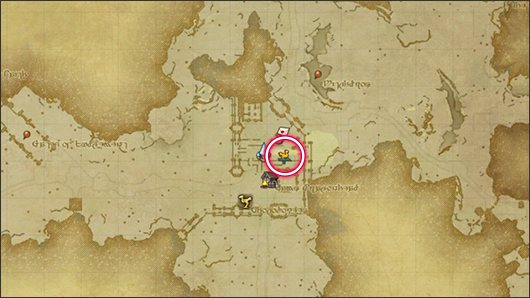 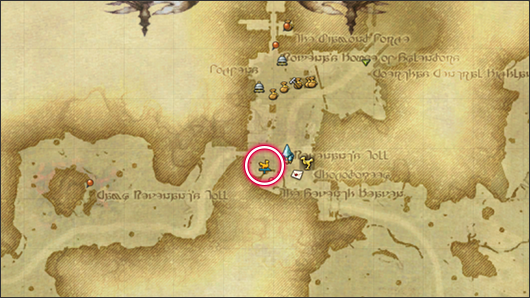 Following the addition of the Ixal settlement, graphics for the locations below have been adjusted as follows:.
The entrance near Ehcatl in the North Shroud (X:24 Y:22) has been adjusted.
The gates in Natalan at Coerthas central highlands (X:32 Y:22) now open, allowing players to enter.


New items are available from the Hunt Billmaster.

Actions and traits have been adjusted as follows:


The Carteneau Flats: Borderline Ruins has been adjusted as follows:
To better ensure the outcome of a match is determined after the halfway point, the spawning time of interceptor nodes has been adjusted.
The HP of interceptor drones and interceptor nodes has been increased.
Players can now use vote dismiss when incapacitated.
* This change will not be applied to dungeons or raids.
The effects of glamour prisms will now be applied to gear when used in the Wolves' Den or Frontline.
Players can now form an alliance prior to undertaking the Labyrinth of the Ancients or Syrcus Tower.
Forming an Alliance
After forming a full party (eight players), target the leader of another full party, then select Invite to Alliance from the subcommand menu. Once invited, a notification window will be displayed.
Alliance invitations can also be sent via the Player Search interface, Friend List, or Free Company interface.
Please note that the leaders of each party in the alliance must be in the same area before registering for duty. 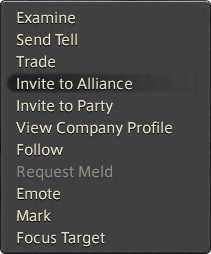 After inviting the first party to an alliance, a confirmation window will be displayed, allowing you to confirm the status of the alliance.


Registering for Duty as an Alliance

After meeting the following conditions, the leader of Party 1 can register for duty on behalf of the alliance


A full alliance of 24 members (three parties of eight) has been formed.
The leaders of all participating parties are in the same area.
* Composition requirements are not imposed upon preformed alliances.

The duty will commence when all players have selected Commence.

The alliance registration will be withdrawn in case of the following:


Items
New Items have been added
View the new items.


When placed on estate grounds, the Junkmonger NPC will now sell magicked stable brooms for 20,000 gil.
In order to address the issue of players undertaking a duty and then equipping gear lower than the required item level for the purpose of spirit bonding, the following adjustments have been made:
The rate at which gear gains spiritbond will now be reduced when gear is not the appropriate level for a given duty or open-world encounter. Furthermore, if the item level of gear is too high or too low, it will no longer gain spiritbond.


Certain previously unsellable items can now be sold.
New mounts have been added. 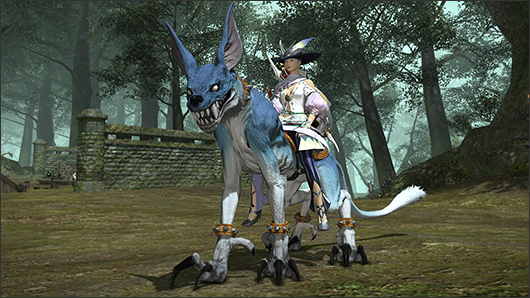 New minions have been added: 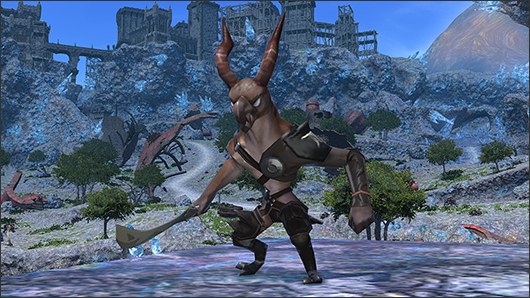 System
New achievements and titles have been added.


Retainer ventures have been adjusted as follows:
The number of elemental shards obtained from retainer ventures has been increased.
The rate of acquisition for Minute Mindflayer from Field Exploration XIII has been reduced, and the rate of acquisition for all other items has been increased.
Items that can only be obtained by retainers who have attained a certain item level (Disciple of War or Magic) or gathering rating (Disciple of the Land) have been added to Quick Exploration. 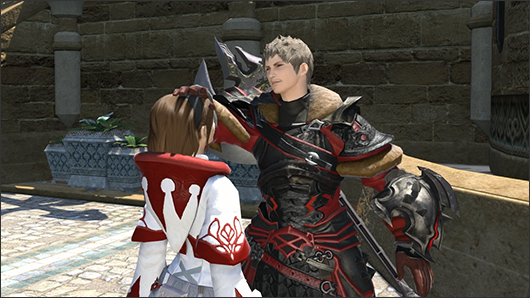 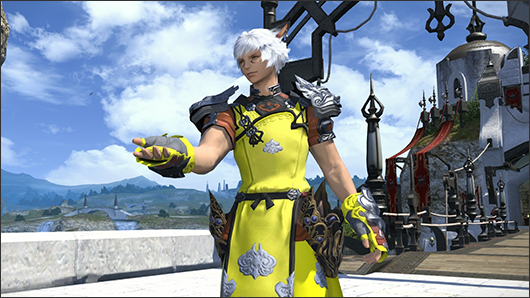 Certain emotes have been adjusted as follows:
Your character's height in relation to that of your target will now be used to determine how the emote is executed when used to interact with other targets. As of patch 2.35, the Poke, Pet, and Hand Over emotes have been affected by this change.
Please note, however, that emote adjustments will not be made when sitting, mounted, or when no target is selected.


New phrases have been added to the auto-translation dictionary.


Known Issues
An issue wherein, when the Ixal Beast Tribe Quest buffs “Facility Access: Specialization” and “Facility Access: Specialization II” are active, the error message that appears when additional actions cannot be used is incorrect.
An issue wherein the incorrect log message is displayed when a retainer levels up from 49 to 50 from a Quick Exploration.
* The correct log message will be displayed for subsequent ventures with the level 50 retainer.

Down Of Justice (Tiamat) has been formed.

Possimpable (Ravana) has been formed.

Minor Mishaps (Bismarck) has been formed.

Mote Of Icecream (Zurvan) has been formed.