Patch 4.57 introduces the World Visit System, giving players more freedom than ever before!

Patch 4.57 contains content that can only be accessed by registering the expansion packs for FINAL FANTASY XIV to your service account. To distinguish between adjustments that are and are not affected by the registration of these expansions, the following notations will be used throughout the patch notes:

If you have accepted the quest "Legacy of Allag" prior to the release of Patch 4.4, a message prompting you to abandon the quest and accept it again will be shown in the Duty List.

* The automatic demolition of estates on the Aether and Primal data centers was suspended in October 2018. However, after careful consideration, we have decided to resume auto-demolition with the release of patch 4.57. Please refer to the Lodestone for details.

The Wreath of Snakes (Extreme) has been moved from the Raid Finder to the Duty Finder.

The weekly restriction on the number of Alphascape crystalloids available as completion rewards in Alphascape V4.0 has been removed.

The strength of the Echo granted in the following duties has been increased.

The Echo will take effect upon entering these duties, increasing players' maximum HP, damage dealt, and healing potency by 20%.
* Unlike other instances, the strength of the Echo will not increase in the event all party members are incapacitated.

The Echo will take effect upon entering these duties, increasing players' maximum HP, damage dealt, and healing potency by 15%.
* Unlike other instances, the strength of the Echo will not increase in the event all party members are incapacitated.

Adjustments have been made to the Orbonne Monastery.

Scaevan Ester, used to strengthen Allagan tomestones of genesis weapons to item level 400, can now be obtained from Eschina in Rhalgr's Reach (X:13.8 Y:11.8) in exchange for items.

Adjustments have been made to Eureka Pagos.

Season Thirteen of the Feast will begin.

When the season has ended, the top combatants for solo rankings will receive special rewards.
* The number of rewards distributed may differ between data centers in the event players have the same ranking.
* Rankings will be available for viewing the day following the start of Season Thirteen and will be updated daily. Should an error occur with calculating results, the day's rankings will not be updated.

Set bonuses have been added to the following items:

The World Visit System has been added.

You may now visit other World servers in your data center to party with friends, purchase items, and tackle duties.

To visit another World, select "Visit Another World Server" from the aetheryte in the locations below.
* You cannot use the World Visit System while in a party. 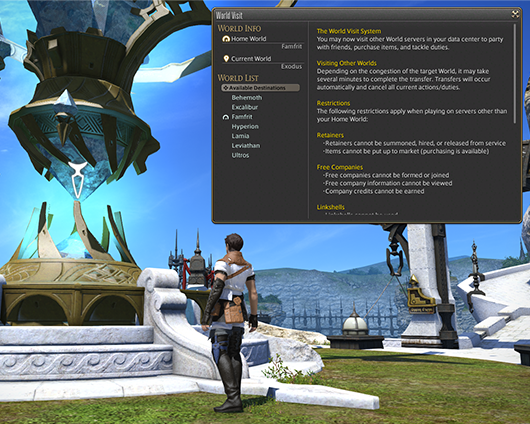 In some cases, you may have to wait before your request to transfer can be processed. When your character is ready to be transferred, a window will automatically appear to inform you. This information is displayed in a similar fashion to the queue for the Duty Finder.
* Depending on the congestion of the target World, it may take several minutes to complete the transfer. Transfers will occur automatically and cancel all current actions/duties.
* You cannot use the Duty Finder while waiting for the World Visit System.
* You cannot move to another area while waiting for the World Visit System. 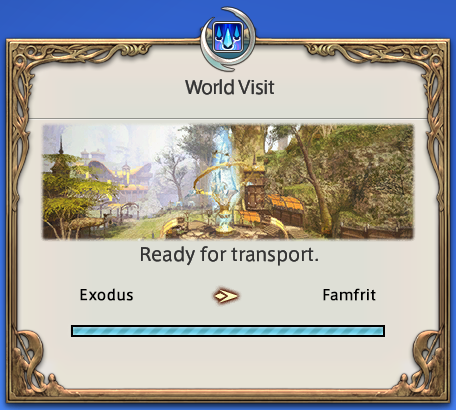 When Visiting Another World

An icon in the Server Info HUD will indicate that you are visiting another World.

Certain features are unavailable or restricted when visiting another World.

Disciples of the Land

Due to the addition of the World Visit System, chat messages from players from other Worlds will be indicated with "@[Home World]" after their name.
* If their Home World is the same as yours, this will not be displayed.

You may now select from three North American data centers.

In accordance with the increased number of data centers, the Worlds assigned to each data center have been changed.

More information on the changes to North American data centers is available here.

This feature allows players to save backups of character settings and client settings to the FINAL FANTASY XIV server.

Settings data saved to the server can then be downloaded to a different system, allowing players to easily carry over their custom settings.

Thots R' Us (Gilgamesh) has been formed.

Machina Dolls (Faerie) has been formed.