Patch 3.25 brings a number of additions and refinements to the realm, including the continuation of the anima weapon quest line, a new chocobo racing challenge, adjustments to PvP, and more!
Playable Content
Battle System
Items
System 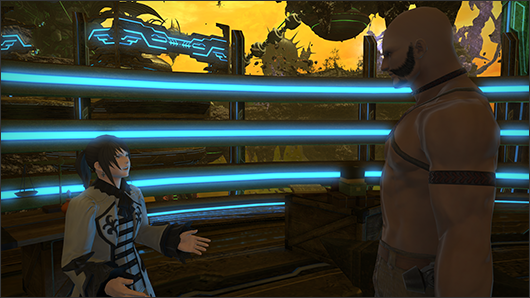 Players will be able to enhance the strength of their anima weapons by completing this quest.

* Please consult and exchange information with other players as you progress to learn how these weapons are enhanced.

- Class/Job-specific Quests
Anima Weapons quests employ a system which will require players to proceed using the same class or job with which they accepted the quest.


Grand Companies
[2.0] The number of company seals required for the following items has been reduced:


Housing
[2.0][3.0] The descriptions for where to obtain certain orchestrion rolls in the Orchestrion List have been changed.
The Manderville Gold Saucer
[2.0] The Chocobo Challenge has been added to chocobo racing, which pits players against special racing opponents. 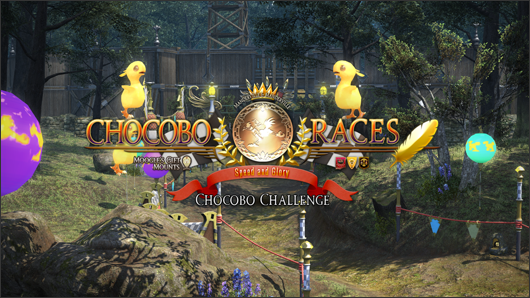 - Entry Requirements
Challenge races will be available upon speaking with the Race Chocobo Registrar in the Chocobo Square (X:6.1 Y:4.8).
* Chocobo ratings must exceed a certain threshold to participate.

- Participating
Speak with the Race Chocobo Registrar in the Chocobo Square (X:6.1 Y:4.8) and select your desired challenge race.
* Players cannot register for challenge races while in a party.

Chocobo Challenge
Increasingly difficult challenges will be made available as players complete each race. Please note that your chocobo's rating must exceed a certain threshold to participate in each race.

Players will only receive a reward for first-time completion. 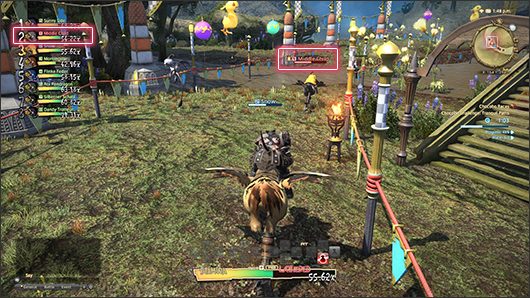 [2.0] The following additions and adjustments have been made to chocobo racing:
New race abilities have been added.


New race items have been added.


The amount of experience gained upon completing races has been increased.
The strength of NPCs has been reduced.
The number of obstacles that appear during races has been reduced. Furthermore, the positioning of obstacles has been adjusted.
When more than two new players are registered for a race, bonus experience proportionate to the number of participants will be added to the rewards.
The amount of experience and MGP received has been increased based on the length of courses.
The race item Stamina Tablet will now also restore a small amount of stamina when stamina is at 0.
A special flying text message and graphical effect will be displayed when race abilities and items fail to activate.
A fly texting message will appear when activating the race ability Choco Reflect. 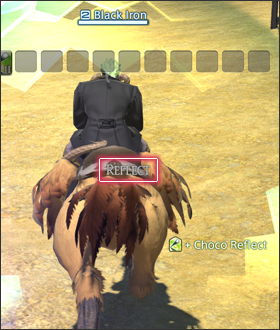 Treasure boxes will now appear on the map and mini-map.

The design of the stamina gauge has been adjusted to improve visibility.
The color of names in the Position list will now match the settings for NPC display names.
The cutscene that displays at the beginning of each race can now be skipped via settings in the Character Configuration interface.


[2.0] The items for sale from the Tack & Feed Trainer in the Chocobo Square (X:5.9 Y:4.7) have been adjusted as follows:
The MGP required to purchase the following items has been reduced:


[2.0] The MGP reward for the following activities in the Gold Saucer has been increased:
Chocobo Races / Lord of Verminion / GATE / Mini-games


[2.0] The completion requirements and rewards for Gold Saucer entries in the challenge log have been adjusted.
Before


Battle System
Thank you for all of your invaluable input regarding the Feast. Based on the feedback we have received so far, a number of adjustments have been made for PvP. In light of these changes, we have decided to postpone the start of Season One until two weeks after the release of patch 3.25. At that time, we will release patch 3.26, which will include final adjustments for the Feast. As always, we encourage you to provide us with feedback that we may ensure seasons are an enjoyable experience for everyone.


[3.0] The following additions and adjustments have been made to the Feast:
In preparation for Season One of the Feast, a button and QR code linking to a rankings page on the Lodestone has been added to the PvP Profile window under Character in the main menu.
* The button linking to the Lodestone is only available for the Windows and Mac versions.
* The ranking page can be viewed after the start of Season One. 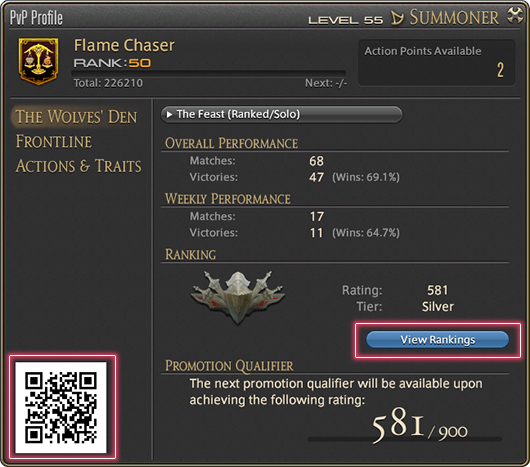 The following PvP actions have been adjusted:


The following adjustments have been made to improve the pace of combat:
The winning condition for the Feast 8 on 8 matches has been changed from 1200 medals to 1100 medals.
Players will be automatically returned to their respective landing points three seconds after being incapacitated.
The duration of Invincibility after being returned to the landing point has been increased from 10 to 12 seconds.


The following adjustment to supply boxes has been made to hasten the flow of combat.
The HP of the Adrenaline supply box has been reduced.

8 on 8 Matches
The number of offense and defense kits that appear at the start of a match has been increased.
Additional adrenaline kits, medicine kits, offense kits, and defense kits will appear on the field after a certain period of time.


A portion of the barriers placed in the center of the map have been removed.
The degree to which PvP ratings increase or decrease at the conclusion of a rated match has been adjusted.
The PvP rating required to participate in promotion qualifiers for each tier has been adjusted.
* In accordance with this adjustment, PvP ratings for the Feast (4 on 4 - Solo) and the Feast (4 on 4 - Light Party) have been reset.
* Update: 3/29/2016 11:30 p.m. (PDT)
Display name settings for the Feast have been added under the General tab of Display Name Settings in the Character Configuration interface.
Abbreviations for the class or job of allies and enemy players will now appear next to name plates.
* Changes to the PvP Display Name setting will have no effect on the display of these abbreviations. 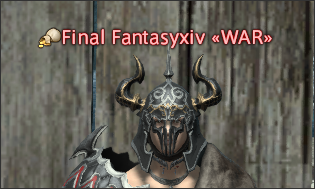 To further improve matching speeds, language settings will be ignored when registering for the Feast (4 on 4 - Light Party).


[3.0] The positions of the entrance in Alexander - The Fist of the Son (Savage) and shortcuts have been adjusted.


[2.0][2.0] The item Sleipnir Horn can no longer be discarded.
* This is to prevent the loss of an item which can only be purchased once per account. 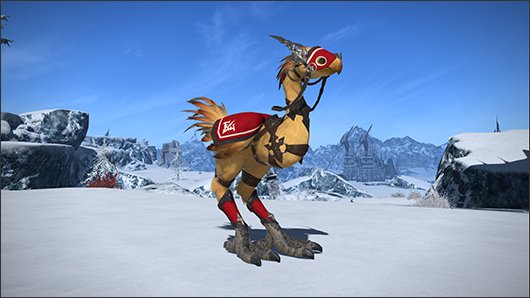 
[2.0] The following additions and adjustments have been made to the Novice Network:
Mentors can now enable or disable the auto-join setting for the Notice Network
* The auto-join setting will be disabled by default upon the release of patch 3.25. To enable auto-join, players must use the text command "/novicenetwork on."


The log message that appears for new adventurers when invited to the Novice network has been adjusted. 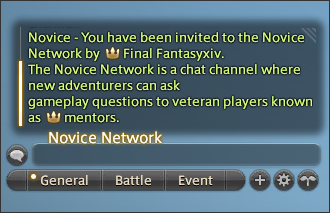 A new adventurer search button has been added to the Novice Network window. Using this feature will search for all new adventurers currently online. 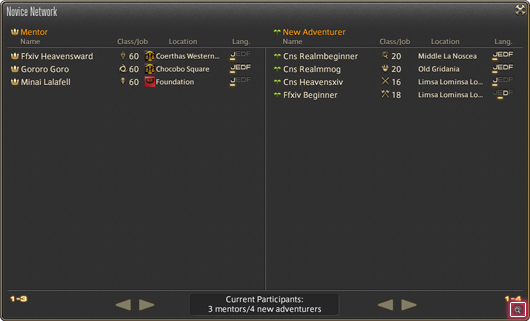 * New adventurers can access the Novice Network after receiving an invite from a mentor.
* Mentors are encouraged to use the Player Search to find new adventurers and invite them to the network.


Different log messages will now be displayed for new adventurers and mentors when joining the Novice Network. 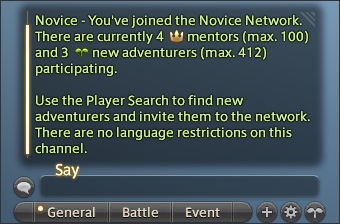 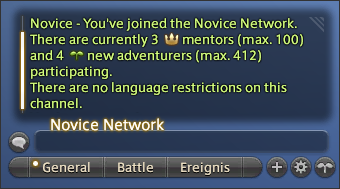 [2.0] Message windows will no longer appear on-screen during cutscenes.


[2.0] New text commands have been added. Following these additions, the New Adventurer status can be disabled using the text command "/nastatus off."


Other various issues have also been addressed.

Known Issues
An issue wherein the help text for the item Chocobo Training Manual - Super Sprint is incorrect.
* The correct description will display in the ability help text.
An issue wherein gamepad controls do not function properly when navigating the Log Filters setting in the Character Configuration interface.
An issue wherein you cannot use the cancel command when assigning buttons in the Keybind interface.
* Players also using a keyboard or mouse can resolve this issue using one of the following methods:
1. Assign any key using the keyboard, then cancel using the gamepad.
2. Select another window using the mouse.
Players who do not own a keyboard or mouse will be required to restart the game client.

The following optional item will be on sale from March 30, 2016.
Mount: Bennu

Colone Colon (Anima) has started recruitment for the cross-world linkshell "you anpanmaru (Mana)."