Greetings, everyone!
Bayohne here, but only very briefly. With the release of the new soundtrack coming soon, it seems that Project Manager M was able to "convince" Sound Director Masayoshi Soken to write a blog post about it!

Sound Director, aka the creator of sound effects, aka the recorder of voices, aka the voice of FATE, aka the guitarist desperately attempting to lose his fingerprints, Masayoshi Soken here!

We created a special trailer for the upcoming A Realm Reborn: FINAL FANTASY XIV Original Soundtrack (releasing March 26!) and it will be shown on the big screen of both the Akihabara Urban Development X and Shinjuku Flags buildings in Japan.

I spend a good amount of time reading what players say online and I often hear that since the soundtrack comes on a Blu-ray that people won't be able to put the music on their smartphones, or that they have to use a PS3 to listen to it. But! You may be surprised to learn that this isn't an ordinary Blu-ray!

The soundtrack features six hours and 48 minutes of content, including 119 songs that were recorded in high resolution 96kHz/24bit linear PCM audio, and full 1080p video! But that's not all! We've also remastered the MP3 versions of the songs so much that the total run time for them is over eight hours long!

The soundtrack was also designed so that you can download the MP3s directly to your smartphones from the Blu-ray via your home network, so you can listen to it easily wherever you go. This feature really makes the soundtrack shine! (Naturally you can extract this MP3 data by using your computer if it features a Blu-ray drive.)

You can listen to the music of the Shroud while you visit foresty areas, or enjoy music from Limsa when you're near the water, and jam out to tracks from Ul'dah when you're stranded in the desert! Have the behemoth music playing when your boss calls you into his office, and play FATE music before giving a presentation at work! There's a song for every occasion on the soundtrack!

For those of you looking to get the soundtrack, you can pre-order it right now! (Also, we'll be including a special little something with the disc!) 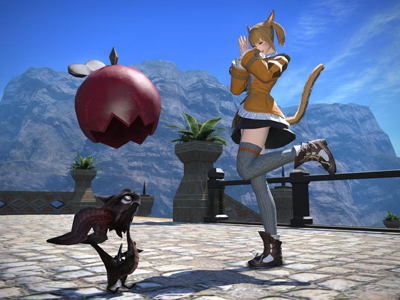