There's only one week left until we can all experience Patch 3.5 - The Far Edge of Fate, and while the main scenario and new battles are at the forefront of the hype train, there are a ton of exciting features being added that make Patch 3.5 even more epic.

Our shutterbug Warriors of Light will be much enthused to hear that the group pose feature will be receiving a vast amount of additions, and while this was introduced briefly during the Letter from the Producer LIVE that took place at Fan Festival 2016 in Tokyo, let's dive in and check out what's possible with these new features!

■Group Pose Recap If you feel like you're in the dark room thinking, "I don't even know how to use group pose," all you need to do it type "/grouppose" or "/gpose" into the chat box.

To access the special camera setting window that was added last patch, you can press the following buttons during the group pose.

■Addition of Extra Commands Now, I know I just got done telling you that you need to use a text command to use this feature, but both "Group Pose" and "Idle Camera" will be added to the "Extra" category of the action list window. This will remove the need to type in each of the text commands, and you'll be able to take these kind of screenshots easily just by pressing the actions on your hotbar! 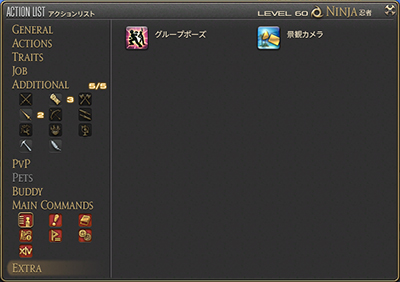 (All the images below can be enlarged by clicking on each of them.)

■Addition of color settings and expansion to the number of light positions Though we feel a bit sorry for our bright minion buddy, Wind-up Sun, we're expanding the amount of light sources that can be placed at the same time, and you'll be able to set up to 3 sources! Additionally, you'll be able to change the color and amount of each of the light sources. Now regardless of where you are or what you are doing, you can adjust the lighting to be just right! 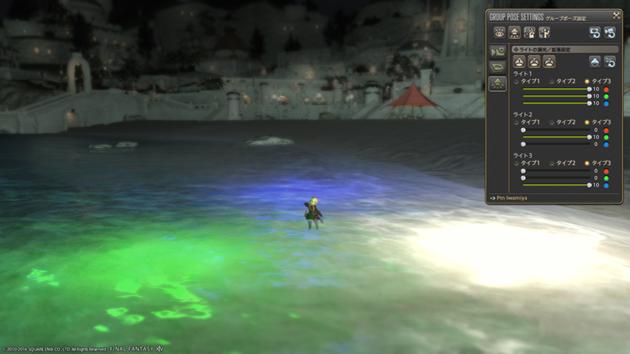 ■Addition of color filter patterns Change up your screenshots with seven new filters and color variations! 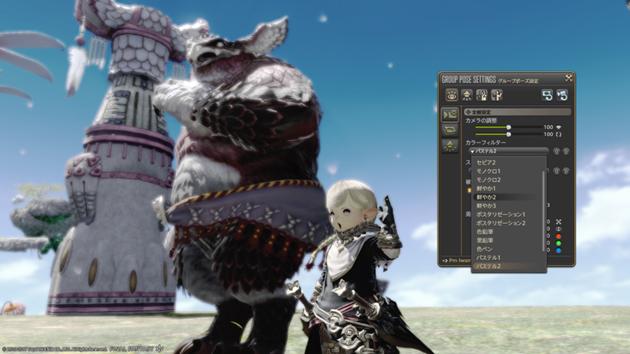 ■Addition of screen effects Spice up your screenshots even more with 10 different layer effects! 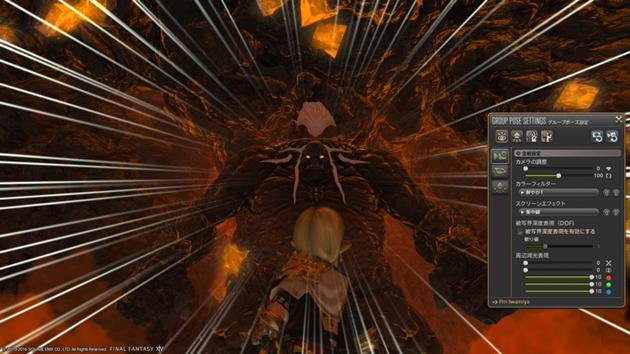 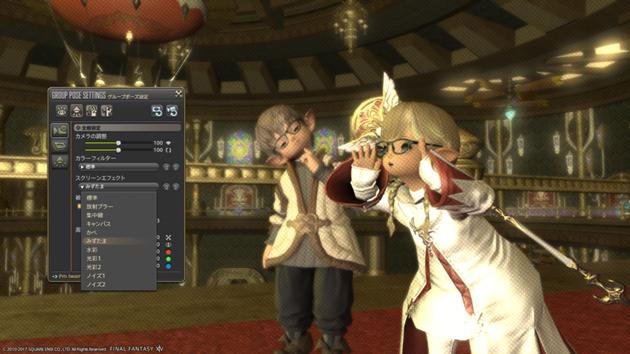 ■ Addition of angle of view and roll angle adjustments The angle of view for the group pose feature is breaking through the limitations, and it will be possible to zoom in and out more than ever before. 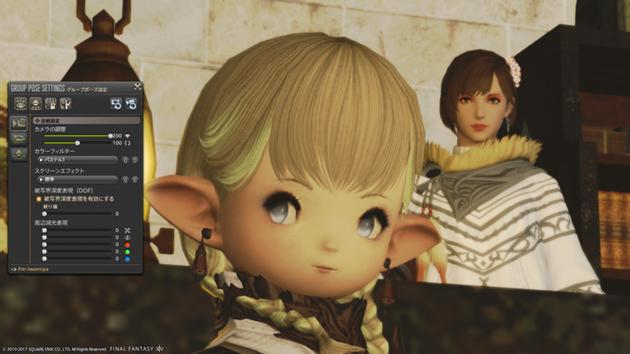 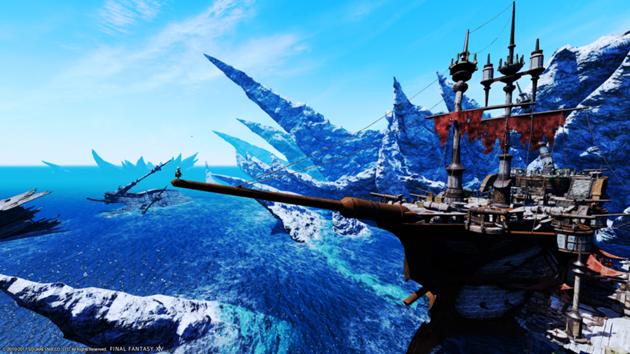 We've zoomed out so far, you almost forget about the tiny Lalafell standing on the ship's bow! Adjustments to the roll angle make for some fancy screenshots!

■Addition of a frame feature We're adding a picture frame and torn paper frame, and the size of the frames can be modified by adjusting the angle of view and other combinations, so try out various settings to frame your picture just right! 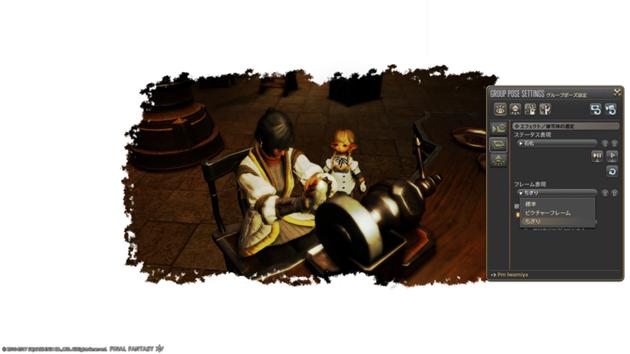 ■Addition of status expression Whether you're frozen in place, petrified of the camera, or confused about why you're in the shot, it will now be possible to capture these statuses as emotes for group poses. 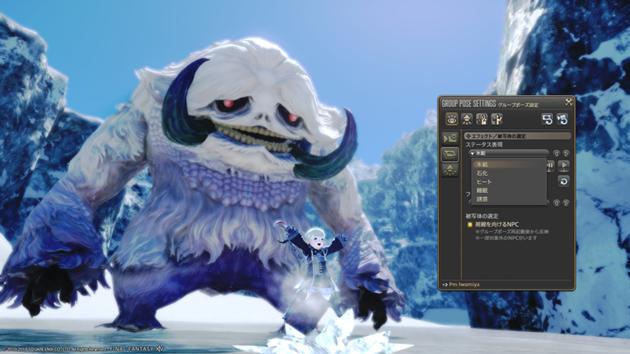 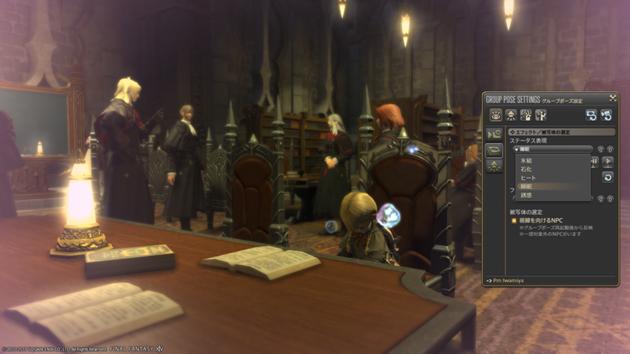 ■Group pose support for certain NPCs While limited to only certain NPCs, you'll be able to include them in your group poses. Setting dear old Rowena or the loveable Khloe as your target will make them the focus of your group pose shot, and of course you can have them face towards the camera! 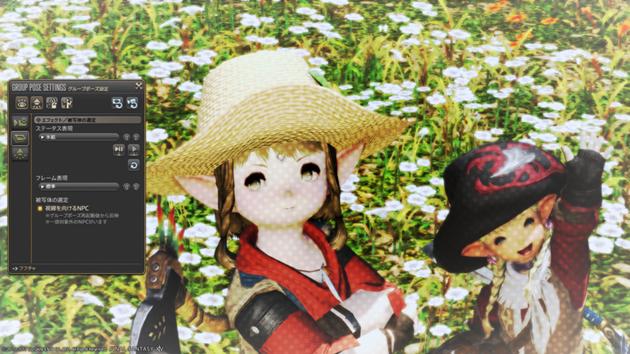 ■Loop support for certain emotes This feature will allow you to loop your favorite poses and emotes to make it even easier to capture the perfect moment!

Whew--that was a lot of new features for group pose!

Oh wait, there is actually one more...

■Bonus feature There have been a lot of requests to toggle the display of the chat log during group pose, and the team managed to do this for Patch 3.5!

To display the chat log all you'll need to do is hit the "Enter" key or the "Back/Select/touch pad" button while in group pose mode.

By right clicking or accessing the sub-command menu on the chat tab and selecting "hide log window", the window will disappear. Easy!

Between going through the main scenario, unlocking the new dungeons, challenging Zurvan, playing with the new party finder additions, going on wacky adventures with Hildibrand, exploring Dun Scaith--the list goes on--be sure to check out the new camera features at some point as we're looking forward to seeing everyone's creativity!