Fernehalwes here again for a very special edition of the Developers’ Blog.

I’ve worked hard the past few months to bring you exclusive coverage of never-before-seen content, and while a lot of it has been breathtaking, not all of it has been, what you might call, mind-blowing. So, last night, I waited until everyone had gone back home and then started digging through the art team’s folders on the project data servers... Half an hour later, I finally struck the mother lode.

You may recall back when Yoshi-P used official player polls to find out what race should be added to the list of playable characters. It turned out that there was a lot of support for both the rabbit-like Viera and croco...gator...lizard-like Bangaa from FINAL FANTASY XII and the Ivalice series.

However, instead of deciding on the Viera and incurring the fiery wrath the Bangaa crowd, or selecting the Bangaa and forever alienating the Viera crowd, it appears the dev team has decided to take the best of both worlds...and create the Viangaa! 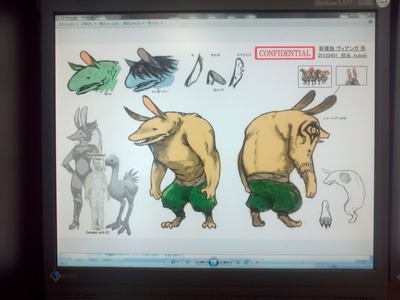 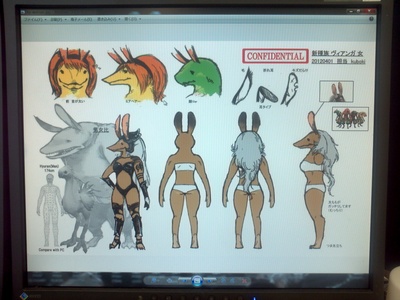 In the same folder, I also found what appears to be the spec document that goes with the art.

Bangaa (More powerful than a Roegadyn) + Viera (More elegant than a Bangaa) = The beautiful, yet fierce Viangaa!

Physical Appearance - Taller and more sophisticated than an Elezen but with a build sturdier than a Roegadyn
- Customizable ear length, snout length, skin color, and “package” size

Basic Characteristics - Hail from the Farreach, leading many to take up residence in the city-state of Sharlayan.
- Have excellent negotiating skills (store prices are 10% lower)
- Movement speed is 1.2 times faster than other races
- They have an extremely musky odor which other animals detest
.............Chocobos and other living mounts will not allow Viangaa to ride them
.............All field monsters will aggro
- Skilled at both the bow and magic (starting bonuses to DEX and INT)
- Extremely conservative. Conversation with other races is strictly forbidden.
.............If chat window is used, a Viangaa assassin will be sent to stalk the player.

I can’t wait to think up the naming conventions for these guys!